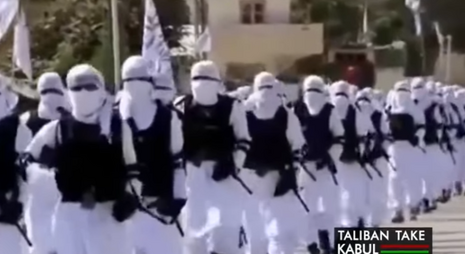 Newsweek Senior Writer of Foreign Policy Tom O’Connor pushed how Taliban Cultural Commission member Abdul Qahar Balkhi “told Newsweek that his group sought worldwide recognition of the Islamic Emirate.” Balkhi propagandized to the outlet how the organization's drive for “recognition” would be bolstered in part by the terror group’s commitment to “fight terror” and so-called climate change. “‘We hope not only to be recognized by regional countries but the entire world at large as the legitimate representative government of the people of Afghanistan,’” Balkhi said in part, according to Newsweek.

It is damning that a U.S. publication would lower itself so far down the eco-extremist cesspool that it would attempt to humanize an Islamic terrorist group currently slaughtering people in Afghanistan as a result of President Joe Biden’s massive foreign policy failure.

O’Connor propagandized how Balkhi “argued that such a move [for world recognition] would be to the benefit of not only Afghanistan but nations across the globe.” He dedicated several lines  to allowing Balkhi to direct attention away from the murder his organization is inflicting on the Afghani people onto climate change:

‘We believe the world has a unique opportunity of rapprochement and coming together to tackle the challenges not only facing us but the entire humanity,’ Balkhi added, ‘and these challenges ranging from world security and climate change need the collective efforts of all, and cannot be achieved if we exclude or ignore an entire people who have been devastated by imposed wars for the past four decades.’

O’Connor even puffed how “the Taliban have expressed their concern for the environment and its future.” He did this before adding a qualifier that the group’s takeover placed it “effectively in control of what's estimated by the U.S. Geological Survey to be up to $1 trillion in mineral resources.”

But O’Connor’s Taliban spin was horrific in another context as well. The United Nations reported in July that “[m]ore women and children were killed and wounded in Afghanistan in the first half of 2021 than in the first six months of any year since records began in 2009.” The UN said these records followed “the Taliban offensive to take territory from Government forces.” But that didn’t stop O’Connor from summarizing the Taliban’s absurdity that “militants would never again be allowed to launch attacks against other countries” in the first paragraph of his story.

Conservatives are under attack. Contact Newsweek and hold it to account for pushing the Taliban’s talking points.