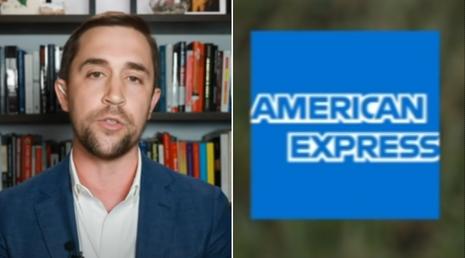 Manhattan Institute Senior Fellow Christopher Rufo reportedly exposed how “AmEx executives created an internal ‘Anti-Racism Initiative’ that subjects employees to an extensive training program based on the core tenets of critical race theory.” The tenets included “‘systemic racism,’ ‘white privilege,’ and ‘intersectionality,’” according to alleged whistleblower documents obtained by Rufo. He reported in a tweet that the company has been using an outside firm to teach employees to “deconstruct their ‘race, sexual orientation, body type, religion, disability status, age, gender identity, [and] citizenship’ onto an official company worksheet.” The employees were then reportedly asked to “determine where they stand on a hierarchy of ‘privilege.’”

But it got worse. According to Rufo’s analysis:

AmEx then instructs employees to change their behavior in the office based on their relative position on the racial and sexual hierarchy. For example, if a member of a subordinate group is present, employees should practice ‘intersectional allyship’ and defer to them.

SCOOP: American Express Corp. has launched a critical race theory training program that teaches employees capitalism is fundamentally racist and asks them to deconstruct their racial and sexual identities, then rank themselves on a hierarchy of "privilege."

In addition, employees were reportedly barred from uttering common phrases like "‘I don't see color,’ ‘[w]e are all human beings,’ and ‘[e]veryone can succeed in this society if they work hard enough,’” according to Rufo. American Express reportedly considered the phrases as "‘microaggressor[s],’" against black colleagues.

Rufo concluded his investigation by pointing out American Express appearing to ironically attack America for its “‘racist heritage’”:

Finally, AmEx recommends a series of resources for employees to dedicate themselves ‘to the lifelong task of overcoming our country’s racist heritage.’ These materials endorse ‘prison abolition,’ race-based reparations, and the idea that white children are racist.