The ABC, CBS and NBC evening news shows have been behaving like President Joe Biden’s drones by shielding his administration from any news that could damage his image on the economy. 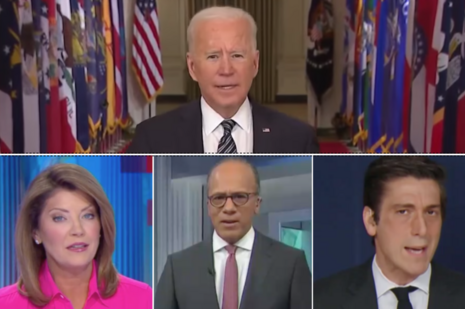 Bloomberg News released a story yesterday headlined, “Biden Eyes First Major Tax Hike Since 1993 in Next Economic Plan.” The story said that, unlike the massive $1.9 pork-filled stimulus package, “the next initiative, which is expected to be even bigger, won’t rely just on government debt as a funding source.” Rather, “key advisers are now making preparations for a package of measures that could include an increase in both the corporate tax rate and the individual rate for high earners.” Biden’s new tax hikes would be on top of the $60 billion in tax hikes Democrats already snuck into the stimulus bill, despite reported hesitancy “to raise taxes amid [a] pandemic.”

CBS Evening News and NBC Nightly News ignored the story entirely. Meanwhile, ABC World News Tonight defended Biden by reiterating a dubious talking point from his campaign that “no one making less than $400,000 a year will ever see their taxes go up. Their focus is solely on the most wealthy and large corporations.” The irony is that ABC’s chief Washington correspondent Jonathan Karl had fact-checked the Biden campaign for making the claim concerning Biden’s tax plan last year. Karl grilled Biden campaign co-chair Rep. Cedric Richmond (D-LA) for leading Americans to believe that Biden’s tax plan would only affect the rich:

Bloomberg News reported that “[t]he tax hikes included in any broader infrastructure and jobs package are likely to include repealing portions of President Donald Trump’s 2017 tax law [the Tax Cuts and Jobs Act (TCJA)] that benefit corporations and wealthy individuals, as well as making other changes to make the tax code more progressive.”

Former CKE Restaurants Holdings, Inc. CEO Andy Puzder noted in November 2020 that “according to the nonpartisan Tax Foundation, the TCJA reduced effective tax rates ‘for all income groups in 2018.’ Because we have a progressive tax system, high earners pay the highest rates and received the largest rate reductions.” The reality that the TCJA benefited income groups not exclusive to the wealthy class was apparently lost on Bloomberg News.

See the list of the following tax hike proposals "currently planned" or "under consideration" in Biden’s absurd tax plan below, as summarized by Bloomberg News:

The Big Three evening networks have shielded Biden from another major, negative tax story before. When a new report was released March 10 showing that Democrats had managed to sneak $60 billion in tax hikes into the COVID stimulus bill, all three networks ignored covering it for the rest of that week.