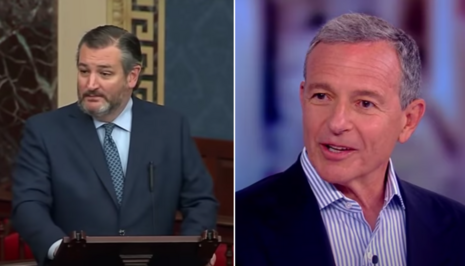 This potential appointment was enough to set Sen. Ted Cruz (R-TX) on the warpath against Disney’s ridiculous history of appeasing the Chinese government.

During a recent speech on the U.S. Senate floor, Cruz said he would be asking for unanimous consent on his proposed SCRIPT Act, “which would cut off Hollywood studios from the assistance they currently receive from the U.S. federal government if those studios allow the Chinese communist government to censor what they’re producing.” Cruz said that “we’ve seen this pattern over and over and over again: Hollywood being complicit in China censorship and propaganda in the name of bigger profits.”

Cruz then took aim at potential China ambassador pick Iger as being one of those CCP-complicit “Hollywood" bigwigs, noting that he’s also a “major Democratic donor.” Cruz particularly hammered Iger for his appeasement of Chinese communist interests:

Disney just came out with the movie Mulan (2020). In the movie Mulan, which the director described as ‘a love letter to China’ —  well, this love letter wasn’t subtle because right in the credits at the end of Mulan, they thank the oppressive government forces who are running concentration camps right now with over 1 million Uighurs in prison. Disney gleefully thanked the jack-booted thugs that are carrying out torture and murder.

Cruz concluded: “[A]pparently, the leader of that effort [Iger] is one of the top candidates to be America’s ambassador to China.”

Disney’s appeasement of Chinese communists had drawn the ire of the Department of Justice at the behest of free speech groups, which have recognized Disney as one of the U.S. film studios that “compete for the opportunity to access Chinese audiences." In effect, this meant "many are making difficult and troubling compromises on free expression.”

The company had also refused to comment on the star of their Mulan remake, Liu Yifei, for praising CCP police in their tyrannical crackdown on the free people of Hong Kong.

Conservatives are under attack. Contact the Walt Disney Company at TWDC.Corp.Communications@disney.com and demand it stop appeasing Chinese communists.