Viewers of ABC, CBS and NBC evening news shows didn’t hear that the pandemic and state-enforced economic shutdowns weren’t enough to preempt the might of U.S. manufacturing in October. Market Watch said manufacturing has hit a "two-year high." 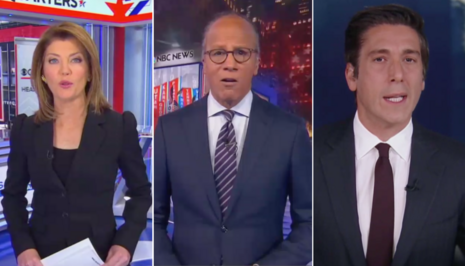 U.S. manufacturing “accelerated in October, with new orders jumping to their highest level in nearly 17 years amid a shift in spending toward goods like motor vehicles as the COVID-19 pandemic drags on,” CNBC reported November 2. The Institute for Supply Management (ISM), which broke the news, said that the “overall economy notch[ed] a sixth consecutive month of growth.” But that wasn’t all. The news got better. ISM noted that “‘[t]he October Manufacturing PMI® registered 59.3 percent, up 3.9 percentage points from the September reading of 55.4 percent and the highest since September 2018 (59.3 percent).'” [Emphasis added.]

CNBC said that “[a] reading above 50 indicates expansion in manufacturing, which accounts for 11.3% of the U.S. economy. Economists polled by Reuters had forecast the index rising to 55.8 in October,” which means ISM’s reading destroyed expectations. [Emphasis added.]

CNBC noted that this was “the last piece of major economic data before Tuesday’s presidential election,” which makes the blackout on the Big Three evening networks all the more egregious.

The Big Three have been engaging in this kind of media blackout behavior throughout much of Trump’s presidency. In September, the MRC had documented 13 instances in 2020 where the Big Three evening news shows have censored good news in the economy and the market.

Suppressing, downplaying or ignoring good economic news is a chronic issue that’s not exclusive to the evening broadcasts. The ABC, CBS and NBC morning news shows have proven to be just as bad.

Recently, CBS This Morning and NBC’s Today (including Today’s third hour) completely ignored reporting news that U.S. GDP jumped to an historic 33.1 percent annualized rate of growth in the third quarter for its fastest growth ever, beating expectations. The only mention on ABC’s Good Morning America of the GDP news was a suppressed, vague mention criticizing Trump in the bottom moving chyron.

When the Bureau of Labor Statistics (BLS) released a report September 4 showing that the unemployment rate dipped nearly two percentage points to 8.4 percent in August from 10.2 percent in June, all three morning news networks ignored reporting the story.