Leftist infighting over “equality” and “titles” is an ironic yet glorious thing to see. 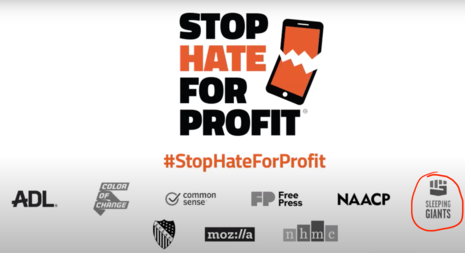 The leaders of Sleeping Giants, a leftist “social media campaign group that has pressured companies to stop financially supporting” conservative media, are getting divorced. The reason? They are “splitting up over a dispute centered on titles, credit, and equality,” according to BuzzFeed News.

Sleeping Giants is one of the groups behind the so-called “Stop Hate for Profit” campaign, which claimed Facebook “allowed incitement to violence against protesters fighting for racial justice in America.” That campaign had been bullying businesses to boycott ad spending on Facebook for not aggressively censoring President Donald Trump.

My life has revolved around Sleeping Giants for nearly four years now, and I had accepted that this movement was more important than whatever I’ve been going through … But it was clear that even though I was doing the same level of work as [co-leader] Matt [Rivitz], he did not consider me an equal.

BuzzFeed noted that the decentralized structure of Sleeping Giants allowed Jammi and Rivitz to “initially split duties without one of them formally being in charge.” That, BuzzFeed said, “allowed it to move quickly and win impressive victories.” However, “the conflict over the public face of the group would never be resolved — and eventually broke it apart.”

Jammi is now leaving the organization “she helped build at a moment when the activist group is urging advertiser boycotts against Facebook. In an all-volunteer organization where no one is paid, titles and credit took on an even greater significance,” BuzzFeed said. [Emphasis added.]

Below is an August, 2018 email conversation between Jammi and Rivitz over their reported conflict, according to BuzzFeed:

Jammi: Having a title represents opportunities — to write, speak and be invited to the table to contribute to a discussion we have both been helping to shape ... I’ve been working with you on this from the start and I imagined that we were partners on the project ... However, I’m starting to feel wary of being sidelined. I’m wary that this above ambiguity could keep me from realizing my ambitions and the impact I want to have as a pro marketer/WOC in my space.

Rivitz: Jesus. I feel horrible about this and had no idea, but I’m glad you reached out and let’s talk about roles and titles and all of that stuff … As you said, we’ve never talked about it and it’s time now that everything is out in the open. You deserve a ton of credit for all of this and you’ll get it. Promise.

Over a year later, “after Jammi and Rivitz had privately fallen out, she began publicly calling herself a cofounder, including on her LinkedIn and Twitter pages, because she felt it was the only way to remain visible,” according to BuzzFeed.

The relationship between Jammi and Rivitz “soured further” when the latter “declined to give Jammi access to the organization’s official email inbox.” According to BuzzFeed, “Rivitz said that in one instance he refused to give her the password after a thread she tweeted on Dec. 8, 2019, in which she wrote, ‘I let myself be gaslighted by a progressive male activist who made me question my worth and the value I bring to our movement.’”