Well, that certainly did not go as planned. 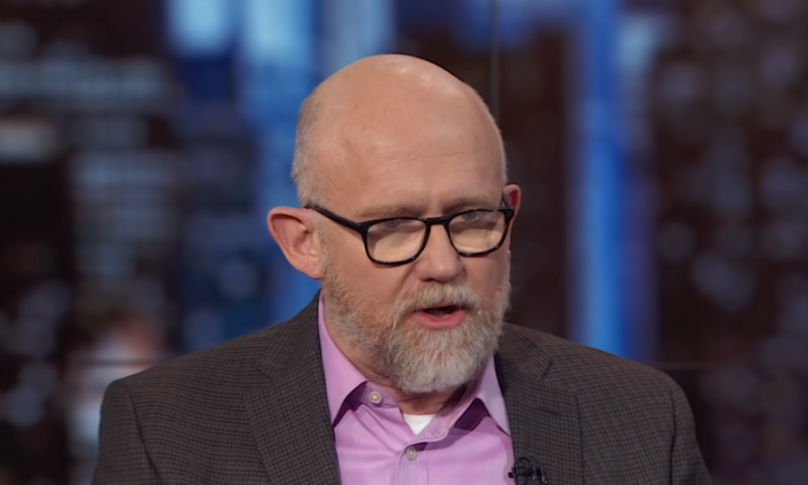 NeverTrumper and “Republican political strategist” Rick Wilson made a sorry attempt to play gotcha over the coronavirus-induced market dip March 9, by sharing a tweet the same day that appeared to be from President Donald Trump in 2015. The tweet he shared called for the punishment of a sitting president if the Dow Jones Industrial Average fell “more than 1000 ‘points’ in a Single Day” (the tweet called it the “Dow Joans”). Wilson commented: “I agree, Mr. President.” The problem? Wilson agreed with a fact-checked “fake” tweet.

What makes this amusing is that liberal outlet Reuters released a report March 2, 2020 fact-checking other accounts sharing that very tweet. Reuters wrote:

“[A]n advanced query on Twitter gives no results for Tweets with the words ‘Dow Joans’ or any other phrase in the screenshot on social media that could with certainty be attributed to Trump’s official Twitter account.” 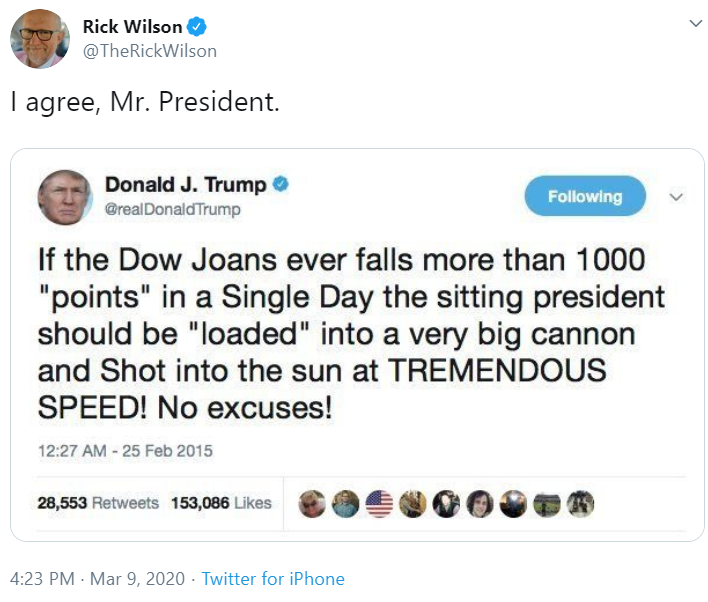 Not even lefty Politifact could defend the authenticity of the tweet. In 2018, Politifact gave the tweet a “Pants on Fire” rating, and noted that “a fake Trump tweet surfaced in which he vowed that such a drop in the ‘Dow Joans’ should result in the president being shot out of a cannon into the sun.” [Emphasis added.]

As of the publication of this article, Wilson had not deleted the tweet. He was forced to admit in the tweet’s comment section that the snapshot he shared was fake almost five hours later: “Yes, people, I KNOW!” 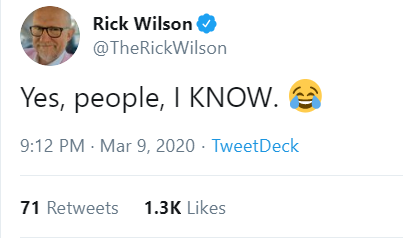 Wilson wasn’t the only one to fall for this “fake” tweet on March 9.

MSNBC’s Joe Scarborough reportedly retweeted Wilson’s tweet and captioned it: “What if it [The Dow] drops more than 2,000 ‘points’ in a ‘Single Day?’” Scarborough later deleted the tweet, according to Fox News March, 9.

This gaffe may have just been Wilson acting off the Chris Matthews thrill-up-the-leg he probably received over the possibility that his desire for a recession to happen was becoming a reality. In 2019, during a panel discussion on HBO’s Real Time, Wilson told host Bill Maher: “[B]ring on the recession if it means that you replace … and I say this as a Republican of the Teddy Roosevelt variety, if you replace a godd*** oil lobbyist who runs the f***ing EPA right now … with a human being.” [Emphasis added.]