“You have more than 70 percent of people think the economy is good if not great,” she declared. She also mentioned how 70 percent of Americans “like their private health insurance from their employer,” and wondered what “advice” Democrats would use to campaign against the strong economy. 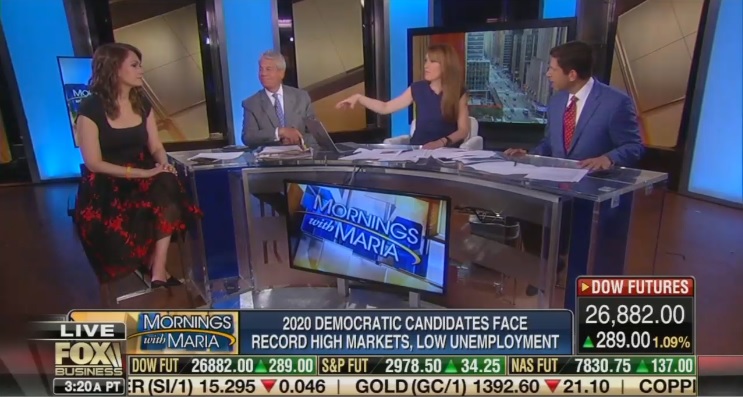 “How do you push back on that, given the fact that the economy, as of today, this is the longest economic expansion in history?” she asked.

“And you can’t keep saying that the economy isn’t working for all Americans when most Americans are saying it’s working,” PricewaterhouseCoopers (PwC) partner Mitch Roschelle added.

Democrat strategist Jessica Tarlov tried to downplay the good economic news, pointing out how “they’re [Democrats] not giving Trump credit for it.” She then reiterated a popular left-wing talking point mentioned by Sen. Elizabeth Warren (D-MA) and others on the campaign trail.

Tarlov argued that Warren earned “top marks” for singling out income inequality as “the greatest threat that we face.” In a jab at President Donald Trump’s tax cuts, she described Warren’s plan of “taking it [money] from the guy on the top and he can afford it because he got a big break.”

McDowell, substituting for Maria Bartiromo on Mornings with Maria, warned how the left’s push for Medicare-for-all through tax hikes would cripple healthcare and send the economy spiraling downward. She called out Sen. Kamala Harris (D-CA) for how she “backtracked” on eliminating private health insurance. Harris had flip-flopped on that idea more than a month before the second Democrat debate, after supporting it at the start of her campaign.

Regarding Warren’s Medicare-for-all plan, McDowell reminded about the perilous consequence of “180 million people losing their private health insurance.” “I don’t know how — how you possibly win on that even if she wins the — even if she winds up winning the Democratic nomination,” she said.

In response, Tarlov suggested how a Medicare-for-all plan would reflect a “general level of care for 320 million Americans,” but McDowell wasn’t having it.

“And these plans rip up Medicare as we know it too,” she pushed back.