Notorious liberal billionaires George Soros and eBay founder Pierre Omidyar are backing a multimillion-dollar fund to reach Latino voters ahead of November’s midterm elections, according to a recent Newsweek report. 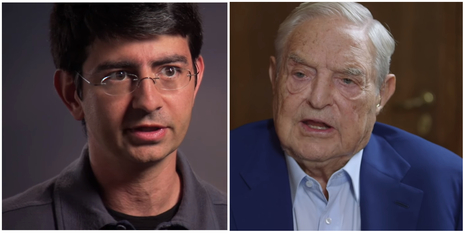 The left seems to be ramping up efforts to reach Latino voters after former President Donald Trump reportedly won unprecedented levels of Latino support in 2020. But a Sept. 1 Newsweek story revealed how the liberal elite are fighting to reverse that trend.

Two leftist billionaires, George Soros and Pierre Omidyar, are coordinating to weaponize millions in cash through the leftist group Way-to-Win’s new donor collaborative, Valiente Fund, in a campaign to recruit Latino voters “for victory in the November midterms.”

Newsweek stated that the Fund “already raised and allocated $15 million ahead of its launch.”

Soros’s Open Society Foundations similarly attempted to spin its propaganda efforts on Twitter as empowering the Latino community. “We’re proud to join this long-term effort to increase Latino political engagement and power in the United States.”

We’re proud to join this long-term effort to increase Latino political engagement and power in the United States. https://t.co/5qfNweIuyY

Soros previously collaborated with Way to Win, the shadowy organization behind the Valiente Fund, in a $59-million effort to encourage “people of color to vote by mail” for the 2020 presidential election. Way to Win is a “strategy hub for left-leaning organizations,” per Influence Watch.The group’s playbook for the 2022 midterm elections seems similar to 2020: Keep dumping money to spread propaganda across American minority communities.

Newsweek spoke on behalf of Democrats, writing that they “feel” that the reversal of the 1973 Roe v. Wade and their “legislative success” in climate change, “will reverse” their “erosion” of support from Latino voters:

“Democrats feel that the end of federal abortion protections by the Supreme Court, coupled with their legislative success in passing sweeping legislation addressing climate change and lowering health care costs, will reverse that erosion and provide them with the motivated electorate they need for victory in the November midterms.”

This is not the first foray that Soros led to propagandize Latino voters. A Soros-led investment group in June supported the acquisition of 18 Univision radio stations by a media group led by former Obama and Clinton operatives.