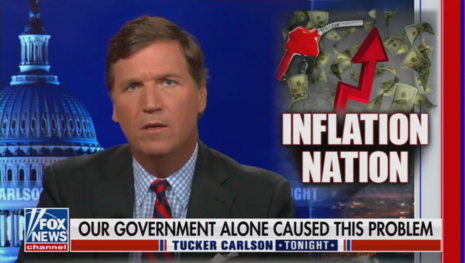 Fox News host Tucker Carlson ripped President Joe Biden for being willing to blame anything but himself for the sky-high gas prices and inflation crippling the American economy. Carlson blasted Biden on the May 12 edition of Tucker Carlson Tonight for wrongly pointing the finger at Russian President Vladimir Putin for inflation.

“Vladimir Putin, for all his faults, did not cause inflation in the United States. The people who run our economy in the U.S. government caused inflation in the United States. And they did it the old fashioned way: by printing a ton of money very quickly and that devalued our currency,” Carlson noted. This makes “Biden very much like the classic arsonist fireman,” the host further pointed out. “He created the disaster he now claims he will fix. ‘I just happened to be here! I’ll put it out,’” he joked.

Carlson emphasized the massive scale on which Biden and “his whole economic team” inflated the money supply:

“Our money supply is going up faster than it ever has in American history. As of today, [the money supply] stands at more than $22 trillion. For reference, on February 3rd, 2020, it was at $15.3 trillion. That is, if you don't have a calculator handy, a 43 percent jump in our nation's money supply in just over two years. So what’s the result? The result is predictable and obvious.”

Inflation soared 8.1 percent in April, beating economists’ expectations. Gas prices shot up 44 percent, airfare increased 33 percent, and eggs, used cars and hotels all ratcheted up by 23 percent compared to the same time last year. The food index skyrocketed up by a startling 9.4 percent, the largest 12-month increase since 1981. And to make things worse, baby formula shortages also set in across America, with stores stocking about “43 percent less baby formula than usual” just last week, according to The New York Times.

Carlson argued that it’s actually the U.S. government who benefits from skyrocketing inflation while Americans suffer:

“[W]e have way too much debt. And the only way out of that is to devalue the U.S. dollar, otherwise the U.S. government won’t be able to afford the interest payments on the money that it owes. No one says that out loud but it’s absolutely true. We have to have inflation or else the U.S. government will default. You have to pay the price for their bad policies.”