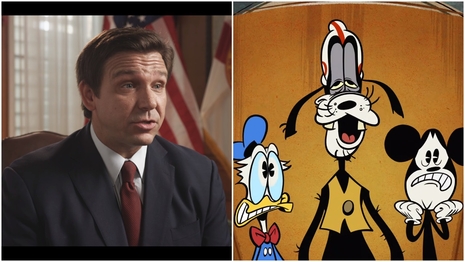 The stock value of the Walt Disney Company took an icy dive after parents and conservative leaders exposed the company for feeding woke values to children.

CNBC reporter Carl Quintanilla broke the news on Twitter April 20: “Disney is now the worst performing Dow stock over the past year — down 31.5%.” A CNN Business headline, “No Magic for Disney investors,” cited fierce competition for subscribers and even inflation as possible causes for the stock drop.

But Manhattan Institute senior fellow Christopher Rufo concluded that Disney was actually suffering from a self-inflicted blow. “Disney has lost more than $20 billion in shareholder value” after the release of videos exposing the company’s woke ideology.

Disney has lost more than $20 billion in shareholder value since the release of internal videos exposing the company's plan to embed gender ideology into its children's programming. It's a strong opening shot against woke capital—and there is more to come.

Disney’s stock drop followed Gov. Ron DeSantis (R-FL) proposal to eliminate special tax benefits for Disney, according to The Washington Post. DeSantis has repeatedly lambasted the media conglomerate and theme park for its woke politics. And on April 20, the Florida Senate reportedly passed a “bill that would end Disney self-governing status,” reported Reuters. “Get woke, go broke,” as Donald Trump Jr. once said.

The past year was especially controversial for Disney as it became clear that the once family-friendly media giant no longer appears to support traditional family values. Public Opinion Strategies reported that a whopping 61 percent of Americans support DeSantis’s law to ban gender ideology from the classroom. Even Democrats supported the law at 55 percent.

This wasn’t the first skirmish between Disney and DeSantis. Disney publicly criticized the Florida governor for his so-called “don’t say gay” bill in a March 28 statement that went viral with over 36,000 likes on Twitter. “Florida’s HB 1557, also known as the ‘Don’t Say Gay’ bill, should never have passed and should never have been signed into law.” Disney continued in its statement, “We are dedicated to standing up for the rights and safety of LGBTQ+ members of the Disney family.”

The public battles between the entertainment industry and DeSantis have become symbolic of the culture wars in America, according to The Post.

The Daily Wire founder and editor emeritus Ben Shapiro tweeted that Disney should step out of the political arena, for its own good. “Go apolitical again, and we'll all be happy to go back to business. Turn into a propaganda and lobbying wing for the most radical activists, and be treated in kind.”

Go apolitical again, and we'll all be happy to go back to business. Turn into a propaganda and lobbying wing for the most radical activists, and be treated in kind.

Fine shot back, “No. I also believe in free markets. And the state of Florida for 55 years has given Disney special privileges that its competitors down the street don’t get.”

Conservatives are under attack. Contact The Walt Disney Company at TWDC.corp.communications@disney.com and demand the company stop shoving woke propaganda down the throats of children.