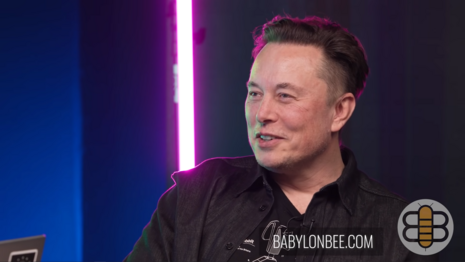 Is the world’s richest man, worth $298 billion according to Forbes, totally based now?

Musk recently made waves in the business world, tweeting, “I am increasingly convinced that corporate ESG is the Devil Incarnate,” on April 3. ESG stands for environmental, social and governance principles, according to Investopedia.

Investments in woke companies that uphold ESG principles like financial giant BlackRock and even Microsoft have exploded across the business world in recent years.

I am increasingly convinced that corporate ESG is the Devil Incarnate

So what exactly is so nefarious about ESG rules? The Great Reset author and longtime talk radio host Glenn Beck explained that ESGs will extend the government’s hand even further into the pockets of small businesses and families on a Jan. 19 special for The Blaze TV.

Beck made clear that ESG funds are like Chinese Communist Party-style social credit scores for businesses. “Basically, if a bank or a company doesn’t meet the standards of those three metrics, then they’re given a low grade that looks similar to a credit score,” he said.

But what Beck described is not a credit score in the traditional sense of the term. “What happens when you get a low or failing credit rating?” Beck asked. “Well, you’re locked out because that’s not the direction the world is going. And so you become a risk to the bank and to the community.”

In other words, individuals are also at risk from ESG regulations if they do not toe the line on gay rights, climate change or whatever other issue elite board members have decreed as morally unquestionable, according to Beck.

While the mighty CEO of BlackRock Larry Fink postured himself as a capitalist in his 2022 Letter to CEOs, he also touted ESGs and claimed that “climate risk is investment risk.”

But wokeness isn’t the only problem with ESGs, it seems. The Associated Press (AP) reported that a Los Angeles judge ruled on April 1 that mandating corporations in California “diversify their boards with members from certain racial, ethnic or LGBT groups is unconstitutional.”

It appears that even some Californians are becoming aware of the evils of ESG regulations.

Musk’s comments followed on the heels of a March 21 Washington Post report that revealed a proposed ruling by a powerful government agency, the Securities and Exchange Commission (SEC), would mandate “hundreds of businesses report their planet-warming emissions in a standardized way.”

Unsurprisingly, The Post celebrated the news as a reflection of President Joe Biden’s so-called leadership in fighting climate change.

At least one reporter suggested that the SEC’s proposed rule would create a boon for the ESG industry. Bloomberg Opinion columnist Matt Levine wrote in an article headlined Everyone Wants to Do ESG Now, “Man is [the SEC’s decision] going to create a lot of ESG jobs.”