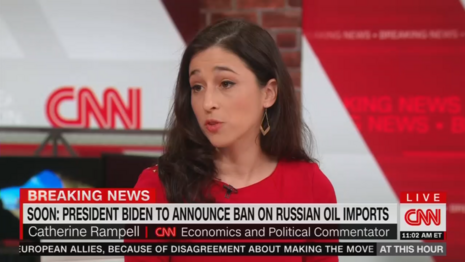 CNN economics and political commentator Catherine Rampell called out the liberal media’s fairy tale that gas prices are skyrocketing mainly because of the war in Ukraine.

Rampell appeared on the March 8 edition of CNN anchor Kate Bolduan’s show to explain what President Joe Biden’s announcement to ban oil and gas imports from Russia might mean for Americans.

“It’s gonna mean higher prices, particularly for the consumers in those markets, right?” she said. “Demand is really high right now. Supply has not been keeping up, even before the conflict in Ukraine, the Russian invasion. If we are now constraining supply even more, that's gonna drive prices up.”

Rampell’s acknowledgement that a low pre-war U.S. oil supply had been driving prices higher marked a total reversal from what Biden shills in the media were claiming just weeks before.

CNN anchor Don Lemon declared back in December that “Here at home, Americans are finally getting some relief.” He then gave a dramatic sigh and leaned back in his chair. “This is good news,” Lemon continued. “Gas prices are heading south, down. A government forecast says that they could drop below $3 a gallon. Oof!”

CNN anchors John Berman and Brianna Keilar also propagandized for the Biden administration on their morning show, New Day. Berman began, “Relief for the United States, as energy costs drop.” Keilar added, “That pain that you’ve been feeling at the pump, it may be short-lived.”

The short dip in gas prices back in December turned out to be a blip. CNN found a different way to spin soaring gas prices in recent days.

CNN business correspondent Vanessa Yurkevich tried to mislead the American people on gas prices by making it appear like paying higher prices was noble on the March 8 edition of At This Hour.

“People we’ve spoken to over the last couple weeks — they’re okay paying higher prices if it means holding Russia accountable for what they are doing in Ukraine. But these prices are likely gonna creep higher, Kate. We’ll see how they feel in the next week or so.”

CNN White House correspondent John Harwood responded to Biden’s announcement to ban Russian energy imports in the very same program. He suggested that Biden attempted “to condition Americans to think that some of the increase may come from predatory behavior” by greedy gas companies, and not as a result of his policies.

Conservatives are under attack. Contact CNN at (404) 827-1500 and demand it report honestly on President Joe Biden’s culpability for the ongoing energy crisis.