On Monday's New Day, CNN again reminded its viewers that the news network's idea of a politically balanced group of voters is to have Democrats who articulate liberal viewpoints paired with Republicans who themselves sound liberal with few conservative views expressed by anyone.

After being bumped from the June 26 show in favor of breaking news, the third planned segment featuring a group of six voters from Charleston, South Carolina, finally aired, and again featured political talk heavily slanted to the left in spite of the presence of two self-identified Republicans with two Democrats and two independents.

One Republican in particular, Ashley Caldwell, complained that South Carolina Republican Senator Lindsey Graham is "super conservative," and fretted that he has not supported a "woman's right to choose." This in spite of the fact that National Journal ranks Senator Graham as one of the most moderate among all current Republican U.S. Senators. Caldwell:

Super conservative. He's so right wing, I wouldn't necessarily support him, especially because of all the social issues. I mean, I'm not positive, but I believe he's pretty conservative with women's rights, and I don't think he's been in support of a woman's right to choose. And that's a big issue for me.

A bit later, Caldwell outed herself as not really voting like a typical Republican as she admitted that she is open to voting for a Democrat and does not "vote based on the party line":

ALISYN CAMEROTA: Are you willing to vote Democrat, independent, or Republican?

The only arguably conservative opinion expressed by Caldwell was her view that Hillary Clinton is "dishonest." The other Republican was not shown expressing any political sentiments in this segment, and related that she has been too preoccupied with her son's health problems to follow the presidential race so far.

CNN's Alisyn Camerota was shown hosting a "word association" game as she named five of the presidential candidates -- Hillary Clinton, Bernie Sanders, Donald Trump, Rand Paul, and Lindsey Graham. Senator Paul was the only Republican who elicited even a single positive response as one of the independents who had previously seemed to have a Republican leaning described him as "genuine."

By contrast, both Clinton and Sanders received mostly positive reviews from both of the self-identified Democrats, although one Democrat, Bo Mateo, did question her sincerity and preferred Sanders. The one independent who had a previous history of sounding liberal also praised Sanders.

Mateo, the most outspoken of the six voters, was shown making negative comments about all three Republicans discussed, and was the only voter seen giving a comment on all five candidates.

Below is a transcript of relevant portions of the Monday, July 6, New Day on CNN, from about 6:50 a.m.:

ALISON CAMEROTA: With the presidential race heating up, we're looking to take the pulse of people in early voting states. So I went to South Carolina to meet with a bipartisan group of voters -- two Republicans, two independents, two Democrats. This all happened at the historic Nathaniel Russell House Museum. It's beautiful.

CAMEROTA (PRERECORDED): Okay, let's do a little word association, everyone. I'll say some candidates' names, and you guys just throw out whatever comes into your mind. Okay, Hillary Clinton.

CAMEROTA: What does that mean, by the way?

CALDWELL: I have a hard time trusting any politicians, but especially her. She's been caught with so many issues.

CAMEROTA: You don't find what she's said about, say, the Clinton Foundation funding, to be transparent?

CALDWELL: Correct. There are some real instances where she just doesn't seem honorable. I don't trust her. 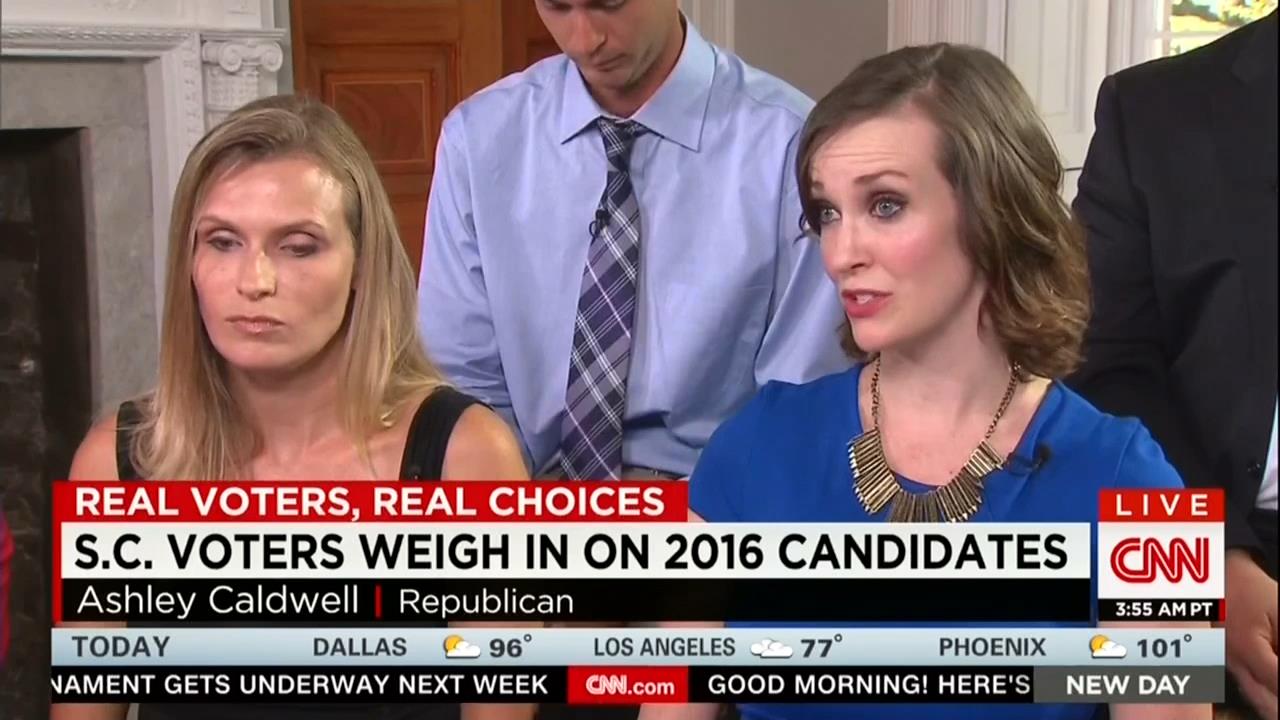 CALDWELL: Super conservative. He's so right wing, I wouldn't necessarily support him, especially because of all the social issues. I mean, I'm not positive, but I believe he's pretty conservative with women's rights, and I don't think he's been in support of a woman's right to choose. And that's a big issue for me.

CAMEROTA: Are you willing to vote Democrat, independent, or Republican?