It was a Friday hatefest against Republican Governor Bobby Jindal and other opponents of same-sex marriage as liberal comedians John Fugelsang and Dean Obeidallah joined substitute host Michael Eric Dyson on The Ed Show to spew vitriol because of the Louisiana Republican's decision to back a religious freedom bill in his home state. 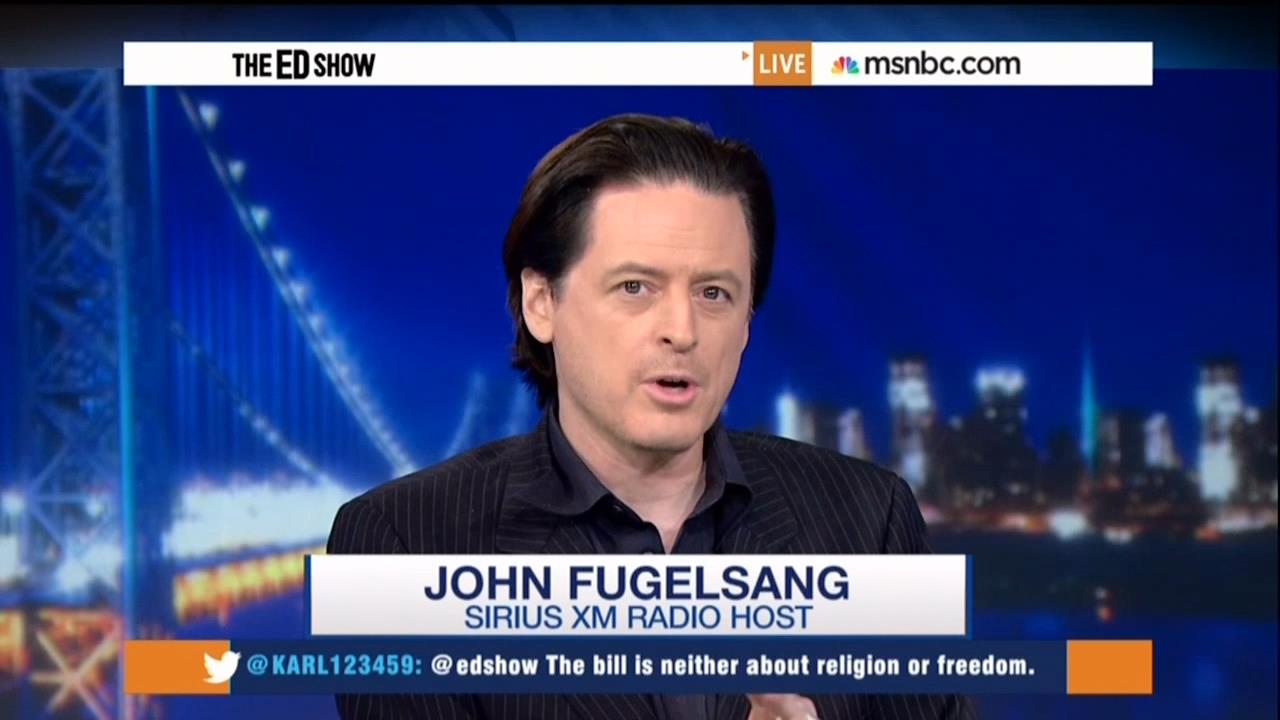 Not long into his rant against Jindal, Fugelsang called opponents of same-sex marriage "bigots" as he cheered for them to "die off," asserting that it would be a "pleasure" to watch. Fugelsang: "Bobby Jindal is having a desperate play to a dwindling demographic of bigots. It's going to be a pleasure watching them die off."

And, as Muslim comedian Obeidallah worked to insert a charge of anti-Muslim bias against Jindal into the discussion, he flirted with introducing an elephant into the room as he conveniently ignored a recent poll finding that most American Muslims oppose same-sex marriage, with Muslims more opposed than nearly all other major religious groups in the U.S. And in the Middle East, polls in recent years have shown that a large percentage of Muslims go to the extreme of supporting the death penalty for homosexual behavior.

Obeidallah -- a Daily Beast columnist and CNN contributor -- compared Jindal to racist Democratic Governor George Wallace and called the Louisiana Republican "despicable" as he accused Jindal of trying to "marginalize" Muslims and gays. Referring to a recent op-ed by Jindal in which he listed priests, ministers and rabbis as religious leaders likely to oppose same-sex marriage, Obeidallah complained: "He left out 'imam' on purpose. His goal is to marginalize Muslims, marginalize gay people because it plays to his conservative base. And he's despicable."

One wonders if Obeidallah would consider most of his fellow Muslims to be "bigots" or that they try to "marginalize" gays.

Below is a transcript of the relevant portion of the Friday, April 24, The Ed Show on MSNBC:

JOHN FUGELSANG, SIRIUS XM RADIO HOST: I have to say he's wrong about a lot of things. Let's clear it one by one. First off, he's wrong about Christianity. Bobby Jindal is to Christianity what Christ was to bigotry and to defending BP after the oil spill. This guy is a shill for big insurance companies.. And it's not so much that he's a bigot -- he's banking on bigots opening up their pocketbooks for his future failed presidential run

There's no part of the New Testament you can use to justify any kind of discrimination against our LGBT brothers and sisters. And what's more, when he talks about these "left" groups, these left-leaning groups that are bullying them into not being allowed to bully gay people, he's talking about young Republicans: 60 percent of millennial Republicans favor gay marriage.

Bobby Jindal is having a desperate play to a dwindling demographic of bigots. It's going to be a pleasure watching them die off. And this is just his big public play to be the latest elf to jump in the big, overcrowded clown car.

MICHAEL ERIC DYSON (laughing): So, Dean, if the law passes, how bad will the pushback be? Will it be substantial?

DEAN OBEIDALLAH: DAILY BEAST COLUMNIST: I hope it would be substantial. And I just want to say, honestly, how I feel about this. Today, Bobby Jindal's letter, to me, is the equivalent of George Wallace in 1963 saying, "Segregation today, tomorrow, and forever,"

OBEIDALLAH: That's exactly how I view it. It's a last gasp of a man who -- and I will give him the benefit of the doubt about bigotry. He's said anti-Muslim stuff in the past. saying we want -- I'm a Muslim -- that we want to impose no-go zones and impose sharia law in this country, which is a fabrication and a lie.

This law goes so far, it says any action a person takes, any action because they're objecting to marriage equality -- gay couple -- is a defense by this law. Meaning you could potentially physically assault someone. I mean, you might say that's ridiculous, but if you actually read the statute -- I used to be a lawyer -- if you read the statute, it's that broad. It defends you against any action adversely by the state for anything that you do to show that you have a moral conviction against gay marriage. It's a horrible law.

And just one quick thing: In his article in the op-ed today, he said, "As a nation, we should not compel a priest, a minister, or a rabbi to violate his conscience." He left out "imam" on purpose. His goal is to marginalize Muslims, marginalize gay people because it plays to his conservative base. And he's despicable.