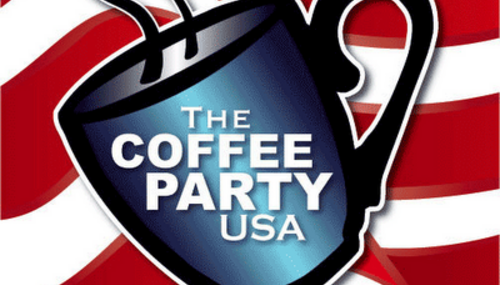 P.J. Gladnick
September 29th, 2014 8:09 PM
Despite a tremendous amount of Mainstream Media hype given to the Coffee Party at its conception four years ago, it remains stuck in utter insignficance. Its only lasting legacy is comedic in the form of perhaps the lamest rap video ever made.

Mike Bates
March 15th, 2010 3:00 PM
Think that the fledgling Coffee Party movement wants bigger government, more social welfare programs and the higher taxes that inevitably accompany them?  Well, think again.  On CNN Sunday Morning yesterday, we learned that simply isn't accurate.  Anchors T.J. Holmes and Brooke Baldwin set up a report from one Coffee Party:HOLMES: All right. TEA party might have some competition out there. This…

TV Reporter: Coffee Party 'Is Loosely Based on Smaller Government and

CBS News Gets Coffee Party Fever: It's a Lot Like TEA Parties

Candance Moore
March 13th, 2010 9:33 AM
On Friday, CBSNews.com's blog Political Hotsheet ran a gushing article that amounted to free advertising for the left's new gimmick of coffee parties. Aside from the friendly tone and complete lack of criticism, the most astounding part was when writer Stephanie Condon remarked that many issues discussed at a Coffee Party could just as well have come from a TEA party. Condon's article began…