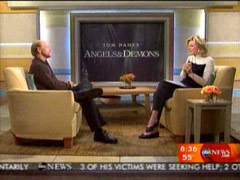 "Good Morning America" continued its hyping of "Angels & Demons" on Tuesday, a film that accuses the Catholic Church of participating in a brutal massacre of a secret society. While talking to director Ron Howard, GMA co-host Diane Sawyer mostly glossed over the film's controversial elements and again referred to the movie as a "great, spiritual scavenger hunt."

She prompted the director to spin himself as not wanting a fight, saying, "And you're relieved. 'Cause I read somewhere you said, 'I don't like controversy.'" At no point did she mention Catholic League President William Donohue and his organization's opposition to the film or the nasty column Howard wrote on the Huffington Post where he attacked, "I guess Mr. Donohue and I do have one thing in common: we both like to create fictional tales, as he has done with his silly and mean-spirited work of propaganda" (referring to the group's criticism of the film). 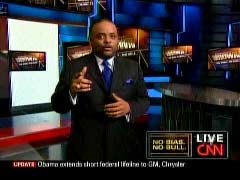 On Monday evening, CNN’s Roland Martin began his eight-week run as fill-in anchor for Campbell Brown on her Campbell Brown: No Bias, No Bull program, who took maternity leave with the upcoming arrival of her unborn baby. As the show began, he gave an “opening statement” of sorts as to how he hoped to anchor the program: “I’m not going to bother with the silly notion of who’s a liberal or a conservative on this show. I voted for Obama and also for George H.W. Bush -- Republicans and Democrats. On some issues, I might be called a liberal -- on others, a conservative. I judge people based on the issues, and refuse to be pigeonholed and wedded to the ridiculous notion of ideology. Our goal on this show is very simple, that is to speak truth to power, no matter the party or the person.”

Despite this attempt to portray his self as a non-partisan, Martin’s record on CNN betrays his left-wing leanings. He has bashed pro-lifers as being “hateful” and dismissed them as not caring about babies once they are born. He slammed John McCain’s voting record on the Iraq war, and used the cliched “fat idiot” insult against Rush Limbaugh. He was a cheerleader for both Barack and Michelle Obama during the 2008 presidential campaign. Martin advised Barack Obama to emphasize his liberal credentials. He also accused conservative critics of Michelle Obama of being “crazy folks on the right” (who also don’t like strong women apparently), and hit “idiot Democrats” when she was accused of using the term “whitey.”

Given this track record, it’s no surprise that the anchor did his best to obscure the issues concerning President Barack Obama’s upcoming commencement speech at the University of Notre Dame. He moderated a panel discussion with Bill Donohue of the Catholic League and Father Jim Martin of America magazine, a Catholic publication which regularly dissents from Church teaching. He teamed up with the liberal Catholic priest to incorrectly give the impression that the Catholic Church’s opposition to the death penalty rises to the same level as its opposition to abortion.

When interviewed by Eyeblast.tv last month, Google CEO Eric Schmidt said that YouTube, the video-sharing site owned by his company, is "pretty serious" about removing the "strange" videos that keep popping up on the site, especially videos "that can be used to incite bad outcomes." Apparently videos designed to incite Catholics don't fall into that category.

A YouTube user who goes by the moniker "fsmdude" has posted more than 30 videos under the title "Eucharist Desecration." Each video features an attack on a symbol that Catholics consider sacred -- by blow gun, nail gun, boiling, sword and cigarette in a few recent episodes.

The creator of the videos isn't subtle about his intent. He was angered by reports of a college student allegedly receiving e-mail threats from "fanatical Catholics" after the student snatched a wafer at mass, so "fsmdude" decided to repeatedly profane the Eucharist on camera for all to see.

On May 13, John McCain supporter John Hagee issued an apology to the Catholic League for controversial anti-Catholic comments he's made in the past. "Catholic League President William Donoghue [sic] accepted the apology," noted Washington Post's Michael D. Shear in the midst of his 8-paragraph story published the following day.