Bill Maher: Trump Has His 'Pravda' in Fox, Breitbart, and Drudge

On Friday, Bill Maher told his HBO Real Time audience he was worried that Donald Trump was "not losing" and was looking like he might get re-elected. He has incumbency, "gerrymandering," and a propaganda department: He has "basically Pravda in Fox News, in Breitbart, in Drudge."

Monday’s The View featured a segment with Richard Clarke, an ABC News consultant and former Clinton and Bush national security staffer. Clarke iterated that “We are a country of refugees. The people we're allowing in are the victims of terrorism. We shouldn't punish victims of terrorism.” When Paula Faris brought up that Marco Rubio said “you can't do a background check on a lot of these refugees. You just can't call someone up in Syria because it's hard to track them down,” Clarke got personal against Rubio.

Not exactly a ringing endorsement for the power of government.

Former counter-terrorism czar and author Richard Clarke got into an argument with NRO and Telegraph blogger Tom Rogan on HBO's "Real Time with Bill Maher" this past Friday night over the rapidly deteriorating situation in Iraq. During the exchange, Clarke dismissed the United States in a manner akin to the "paper tiger" of Mao's scornful denunciation. (Video after the jump)

The day after terrorist Osama bin Laden was killed in a U.S. military action, Good Morning America brought on consultant Richard Clarke to downplay the death as a "propaganda victory" that will "make us feel good," but won't "mean much" for U.S. security."

GMA co-anchor George Stephanopoulos on Monday interviewed Clarke, who worked for both Bill Clinton and George W. Bush. After Stephanopoulos prompted him to talk about how "personally gratifying" the terrorist's death must be, Clarke cautioned, "But, I think we have to put the emotion aside and think about what it actually means for American security. And it doesn't mean that much for American security. "

He continued, "And it doesn't mean that much for American security. It makes us feel good...There's a propaganda victory. But the organization, the network of organizations that he spawned is out there. And many of them are still quite healthy." 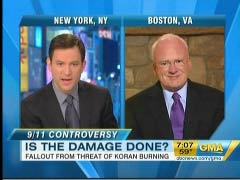 On Saturday’s Good Morning America on ABC, during a discussion of the Ground Zero mosque and the possibility of Koran burning in Florida by Pastor Terry Jones, after anchor Dan Harris brought up the naive liberal expectation that President Obama would be able to improve relations with the Muslim world because of his family connections to Islam and his inaugural speech reaching out to Muslims, ABC News consultant Richard Clarke suggested that Obama’s inaugural address had "helped a lot" to make America safer before being derailed by recent controversies.  Clarke's suggestion came after he had argued that recent events have made America "a lot less safe," with the conversation continuing:

DAN HARRIS: But, you know, there was all this talk when President Obama was inaugurated that here's a man whose middle name was "Hussein," he spent part of his childhood in a Muslim country, he's made a LOT of effort to reach out to the Muslim world, and, in fact, gave an impassioned set of statements on this very issue yesterday. Has none of that helped?

RICHARD CLARKE: Well, it did help. When he said in his inaugural address, "America is not at war with Islam," that helped a lot. But the recent controversies have undone all of that.

As the subject on the most recent installment of "Real Time" moved to the retirement of Supreme Court Justice John Paul Stevens, the HBO host actually said that it was the Republican Party that has changed in the past thirty or forty years and not Stevens' view of the world.

"You know what's ironic is that you know who's really a moderate Republican by '70s standards?" Maher asked. "Barack Obama."

This stupidity came seconds after guest Richard Clarke actually said that the gun rally in Virginia on April 19 was to commemorate the Oklahoma City bombing (video follows with transcript and commentary, file photo):

CNN’s Wolf Blitzer made little effort to hide his liberal viewpoint during an interview of Scott McClellan on Friday’s "The Situation Room." After asking the former White House Press Secretary about his "revival" of the question of whether President Bush used cocaine as a young man, the CNN host followed-up by asking, "I guess the question is, is the President -- this is a blunt question -- in your opinion, a serial liar?"

Earlier in the interview, which began 12 minutes into the 4 pm Eastern hour of the CNN program, Blitzer addressed the issue of supposed "war crimes" related to the Iraq war. First, Blitzer played a video question from a viewer who asked McClellan, "Would you now consider testifying about your colleagues at a war crimes trial?" After listening to McClellan’s answer, Blitzer replied, "Knowing what you know now, do you believe war crimes, as this I-reporter suggests, were in fact committed?"

Prior to the airing of the video question, the on-screen graphic hinted at what was going to be asked: "‘Propaganda’ on Iraq: Were Crimes Committed?"

During the course of the segment, Clarke lamented the lack of action on global warming, Bush's failure to capture Osama bin Laden and the war in Iraq. A telling indicator of Cuomo's agreement with some of Clarke's liberal points was the way in which the anchor mangled the title of Clarke's new book, "Your Government Failed You." The ABC journalist misstated, "But this is 'Your Government Lied to You' -- failed you, rather."

Philip Shenon, investigative reporter for the New York Times, has written a book on the 9-11 Commission and talked about it with Fresh Air host Terry Gross on National Public Radio Monday.