Question: What is more cringe-inducing than a celebrity funeral? Answer: Two back-to-back celebrity funerals. The ghoulish twin spectacles last week memorializing Aretha Franklin and John McCain brought out the worst in family, friends and frenemies. No matter your partisan affiliation, these vulgar exercises in self-indulgence should serve as object lessons on how not to depart with dignity. 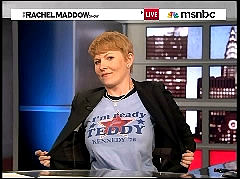 Ana Marie Cox, until the end of last year the Washington editor for Time magazine's Web site, concluded her Friday night (September 4) fill-in gig as host of MSNBC's Rachel Maddow Show -- where she was hardly shy about conveying her liberal views as she spent much of the hour ridiculing conservatives -- by pulling open her jacket to display how underneath she was wearing a vintage “I'm Ready for Teddy Kennedy '76” T-shirt.

Jack Nelson-Pallmeyer is a college professor with a long history of political activism and fearless liberalism.—AP, 5-11-08, profile of candidate for Minn. Dem primary nomination [emphasis added].

Fearless liberalism? Fearless? It's fearless for an American college professor to be a big-time liberal? Give me a fearless break!

Yet that's how the AP described the predictably left-wing politics of the man challenging Al Franken for the right to challenge Republican Norm Coleman for his seat in the US Senate. Among Nelson-Pallmeyer's positions: