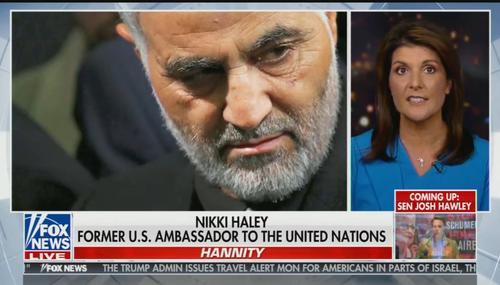 Tim Graham
January 12th, 2020 8:45 AM
One of the routine ways the "independent fact checkers" demonstrate a liberal bias is by leaping to attack conservatives for making a rhetorical flourish on cable news. On Tuesday, PolitiFact threw a Pants On Fire" verdict at former U.N. ambassador Nikki Haley for saying no government is protesting the killing of Iranian teerrorist mastermind Qasem Soleimani, only Democrats are… 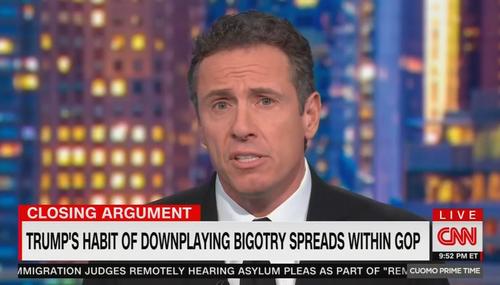 Ryan Foley
December 7th, 2019 4:21 PM
CNN’s Chris Cuomo devoted his closing argument to trashing Nikki Haley for claiming in an interview with The Blaze that white supremacist Charleston church shooter Dylann Roof “hijacked everything that people thought of” in terms of "sacrifice and service and heritage” by “holding the Confederate flag” as he committed the murders. According to the chyron… 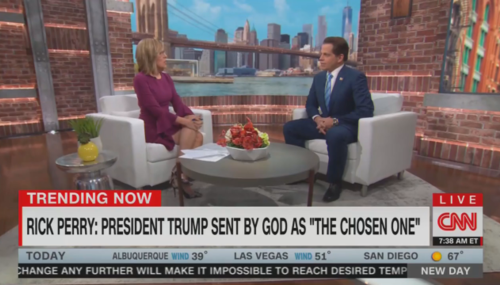 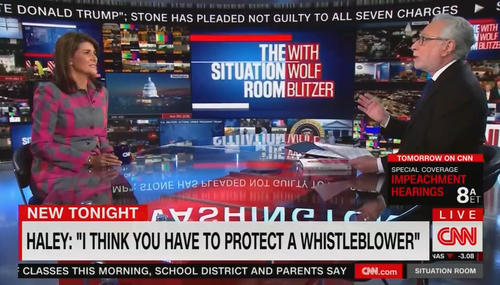 Curtis Houck
November 14th, 2019 10:27 PM
Former U.S. Ambassador to the United Nations Nikki Haley continued her book tour Thursday with an appearance on CNN’s The Situation Room and, during an exchange with host Wolf Blitzer about the Trump impeachment, blasted the liberal media for “want[ing] there to be something wrong” found against President Trump. Hilariously, Blitzer countered that his show doesn’t have a… 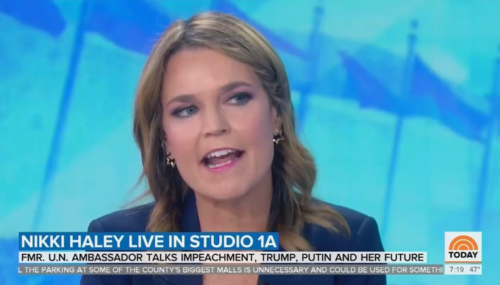 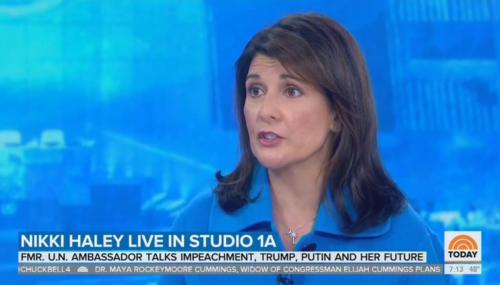 Nikki Haley Tells Off NBC’s Guthrie: ‘You Have to Look at Biden’

Kyle Drennen
November 12th, 2019 10:14 AM
After Monday’s network morning shows all accepted Democratic assertions that “there’s no reason to question Hunter Biden” in public impeachment hearings, during a live interview on Tuesday’s Today show, former United Nations Ambassador Nikki Haley pushed back on that claim and told NBC anchor Savannah Guthrie: “...you have to look at Biden.” 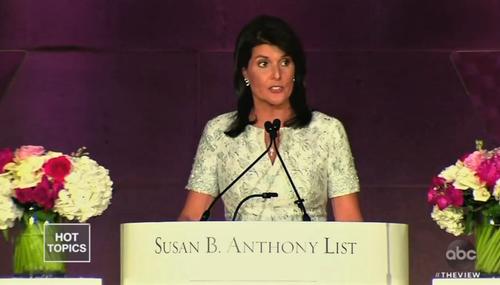 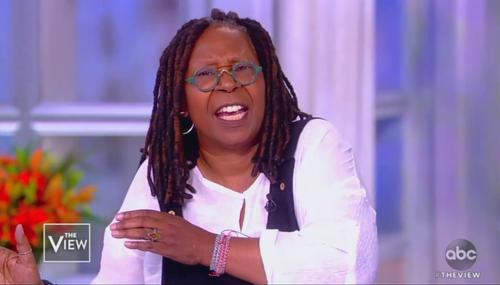 Kristine Marsh
June 4th, 2019 1:56 PM
Abortion was the topic at The View’s hot topics table Tuesday, and this time it was Whoopi Goldberg’s turn to get worked up over recent state bans. Just two weeks ago, Joy Behar whined that Republican men should get forcibly sterilized for passing these bans. On today’s show Whoopi raged at former U.N. ambassador Nikki Haley for daring to speak out against abortion at a pro-life… 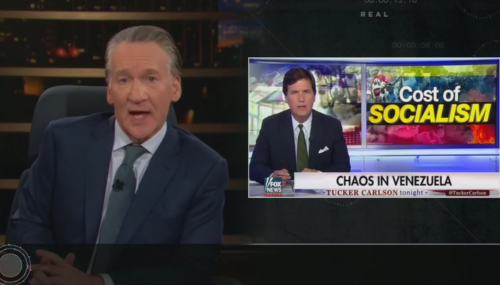 Maher Boasts of Socialism's Supposed Virtues as ‘Capitalism Plus’

Ryan Foley
March 30th, 2019 4:38 PM
Real Time host Bill Maher closed his satirical segment “New Rules” Friday with a public service announcement for socialism that would have made Bernie Sanders and Alexandria Ocasio-Cortez proud. Why? It's because he favorably described socialism as “capitalism plus” before lamenting that “our system kind of sucks.” 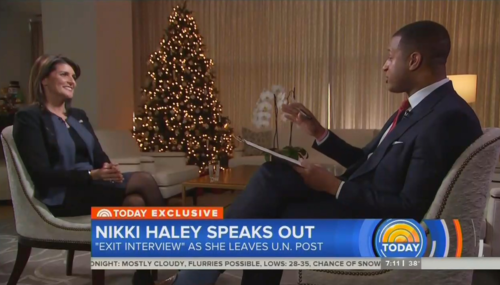 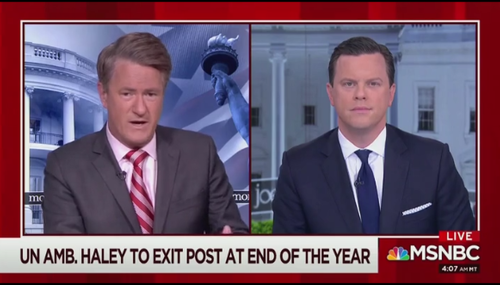 Mark Finkelstein
October 10th, 2018 7:27 AM
On Morning Joe, Joe Scarborough explains Nikki Haley's resignation as UN Ambassador by suggesting she is positioning herself for a 2020 presidential run, on the theory that, as Scarborough predicted back in August, President Trump won't​ ​​​​​​seek re-election. Scarborough surmises that Haley wants to get out in front of Mike Pence. 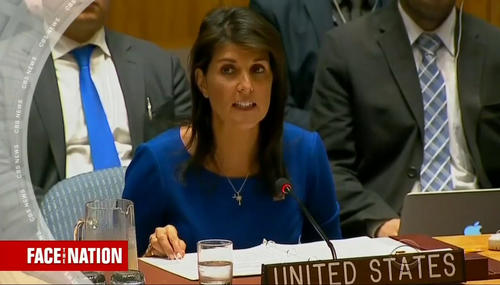 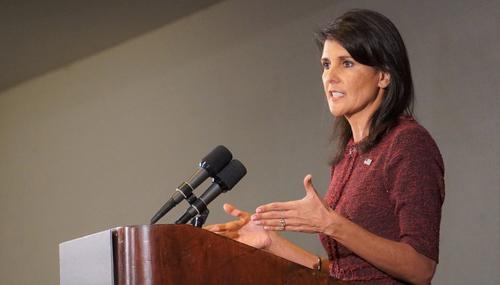 Tim Graham
July 16th, 2018 11:36 AM
United Nations Ambassador Nikki Haley pressured a Washington Post "Wonkblog" reporter into deleting tweets that wrongly quoted her in response to the U.N. claims about "extreme poverty" in America. Stein wrote a story cheekly claiming that Team Trump was claiming victory in the "war on poverty." 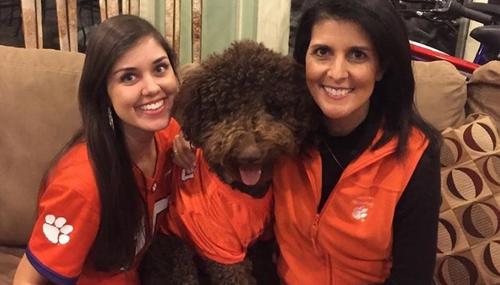 P.J. Gladnick
June 30th, 2018 1:31 PM
How dare any member of the Trump Administration have fun! Slate magazine seemed upset that not only was United Nations Ambassador Nikki Haley having way too much fun in her Instagram account but that even her pet Labradoodle, Ambassador Bentley, was also enjoying himself in his own Instagram.