NewsBusted: We're with Megan Fox On This One, Mr. President

"Megan Fox told Cosmopolitan magazine that pregnancy is 'hot' because it is the act of creating a life. OR, as President Obama once called it: being punished with a baby."

‘Sexiest Woman in the World’ Calls Pregnancy ‘Creating a Life’

The pro-life attitude might not permeate Hollywood, but this actress isn’t afraid to speak up.

Megan Fox, once hailed by the media as FHM Men’s Magazine’s “Sexiest Woman in the World,” graced the cover of Cosmopolitan’s August issue. For her latest piece, Cosmo’s Laurie Sandell interviewed the 28-year-old “Transformers” star on everything from Hollywood to sexuality. A mother of two, Fox explained how pregnancy is “hot” by defining it as “creating a life.”

Hollywood seems to delight in depicting women as sex-starved creatures in its movies - and another new movie reflects that trend. Meanwhile, one young starlet is embracing the raunch off-screen.

Actress and singer Miley Cyrus, who famously played the wholesome Hannah Montana, has become the epitome of the anti-role model for young girls. As reported by TMZ, Miley Cyrus gave her boyfriend a penis-shaped cake for his birthday, then posed for beyond-suggestive pictures with it.

“In all honesty ... I really don't be thinking about Wal-Mart when I make my music or album covers #Kanyeshrug!” This tweet, from Grammy-winning recording artist Kanye West was met with open arms from the editors at The Daily Beast who lined up with West and reassured him that he wasn’t the only “victim” of Wal-Mart.

F-bombs and Women Kissing at the MTV Movie Awards 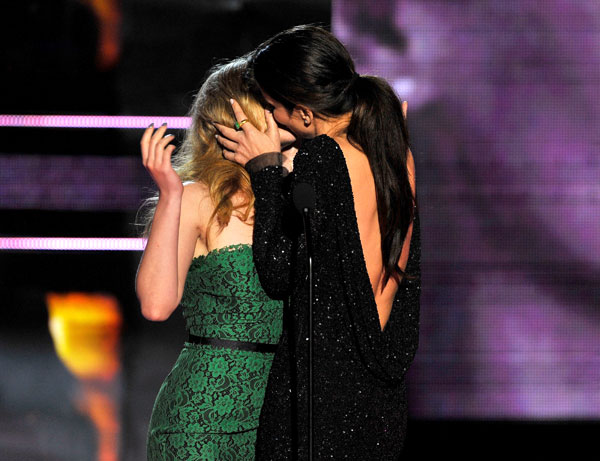 As I walked into the Gibson Amphitheatre at Universal Studios Sunday evening, I had no idea the level of vulgarity I was in store for.

Attending my first MTV Movie Awards, I was immediately stunned by the number of F-words in the opening video clip of Tom Cruise recreating his movie executive roll in the film "Tropic Thunder."

Little did I know that the evening would be filled with F-bombs from a number of Hollywoodans, so much so that the man that accepted the award for best movie at the end of the festivities (Peter Facinelli of the "Twilight" series) commented, "I just want to say I've never heard the word 'f--k' used so many times in one evening."

At that moment, I thought Facinelli was going to comment about just how absurd all the vulgarity was. Instead, he went on an F-bomb-laden speech of his own (video available here, others follow, extreme vulgarity warning):

Fox is blaming Middle America for her potentially career-breaking flop of a horror movie "Jennifer's Body." Asked why it was such a pitiful failure, Fox explained, "the movie is about a man-eating, cannibalistic lesbian cheerleader, and that pretty much eliminates middle America."

Oh my, what ignorant and close-minded folks these Middle Americans must be that they wouldn't want to sit through 90 minutes of that. Really, what is the film industry coming to when Americans won't pay ten bucks to see one half-naked pinup model devour another? 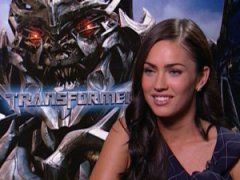 Movie star Megan Fox has a bad habit of bashing middle America and constantly whining about how she is supposedly mistreated in Hollywood as chronicled in June by Leigh Scott of NewsBusters:

Megan Fox recently stated that her solution to a real life evil Transformer invasion would be to negotiate and ask, “instead of the entire planet, can you just take out all of the white trash, hillbilly, anti-gay, super bible-beating people in Middle America?”

I also found these quotes from Ms. Fox:

Class act there, Megan. However, Ms Fox apparently acts like such a brain dead prima donna on the movie set that her "Transformers" crew have struck back and the results are, as my NewsBusters colleague Noel Sheppard would put it, absolutely delicious. Here is Nikki Finke reporting on the background at Deadline Hollywood:

Your humble correspondent has frequently pointed out how incredibly dull his hometown newspaper, the Fort Lauderdale Sun-Sentinel, has become. Well, it appears that the online Sun-Sentinel is now desperately trying to counteract its dull and stuffy image by going overboard in publishing cheesecake photos. Specifically cheesecake photos of Hollywood actress Megan Fox. In the current Sun-Sentinel edition, Megan Fox photos are featured not just once, but twice on the front page. Just click on the picture links of Megan Fox on the front page and you are presented with a grand total of 72 photos of the heavily tattooed actress.

The first Megan Fox photo link is titled,  Beauty Fades? Megan Fox's worst pictures. Click on the cheesecake link and it leads to a Megan Fox photo gallery with this penetrating commentary by Elizabeth Snead: 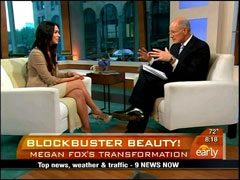 Teasing an upcoming interview with actress Megan Fox on Tuesday’s Early Show, co-host Harry Smith gushed: "...this woman has jumped from virtual unknown to Hollywood A-lister. It doesn’t hurt she is one of the most beautiful women on the planet...And a very nice young person."

Smith failed to make any mention of the "Transformers" star’s controversial comments in a June 5 interview, in which she wished the villainous robots in the movie could "...just take out all of the white trash, hillbilly, anti-gay, super bible-beating people in Middle America." Fox, a self-described bisexual, made the comments while talking with "Total Film UK."

Fellow co-host Maggie Rodriguez similarly fawned over Fox: "Harry already got the chance to meet her and I said ‘how is she?’ You sounded like Tony the Tiger...‘She’s great.’ A lot of people are saying, you know, she’s the new ‘it girl,’ the new Angelina Jolie."

Megan Fox: Another Cowardly Conformist Who Makes Things Worse for Women in Hollywood

Megan Fox recently stated that her solution to a real life evil Transformer invasion would be to negotiate and ask, “instead of the entire planet, can you just take out all of the white trash, hillbilly, anti-gay, super bible-beating people in Middle America?”

I also found these quotes from Ms. Fox:

“Women are expected to be conformist automatons in L.A. but in Britain you can be more yourself and people will take you on face value.”

Far be it from me to point out that the base audience for “Transformers” is young males in Middle America, the same men that Fox condemns to a robot apocalypse.  I doubt the bi-coastal elites from Beverly Hills to the Upper West Side will be waiting in line for the midnight showing of Michael Bay’s latest opus.

Bad news for those living in “Middle America.” Actress Megan Fox would like Megatron, the evil character from her new movie “Transformers,” to blow you up. Kat Giantis, of Wonderwall, reported the actress was recently interviewed by “Total Film UK.” Although nobody asked her who she would like Megatron to obliterate, she volunteered it anyway.

When asked how she would stop the ruthless Megatron from demolishing the world, Fox first said that she would “barter with him.” She then, however, went on to say, “... and instead of the entire planet, can you just take out all of the white trash, hillbilly, anti-gay, super bible-beating people in Middle America?"