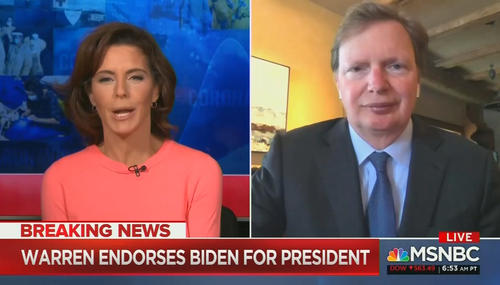 Kyle Drennen
April 16th, 2020 11:23 AM
While touting recent high-profile endorsements for presumptive Democratic nominee Joe Biden, on Wednesday, MSNBC anchor Stephanie Ruhle argued that in order to counter the “daily clown show” of President Trrump’s coronavirus briefings, the former Vice President should establish a “shadow government” and hold his own daily press conferences on the pandemic. 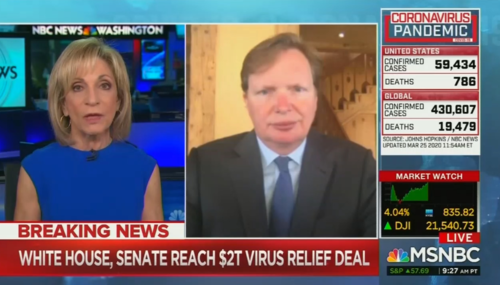 Kyle Drennen
March 25th, 2020 1:24 PM
During her 12:00 p.m. ET hour show on Wednesday, MSNBC anchor Andrea Mitchell revealed her greatest fear amid the coronavirus pandemic – Donald Trump’s approval ratings going up. She fretted over likely Democratic nominee Joe Biden “having difficulty” getting his message out during the crisis and support for the President “skyrocketing.” 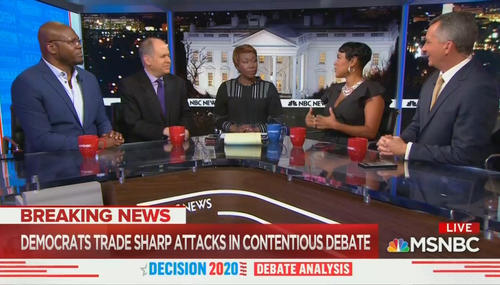 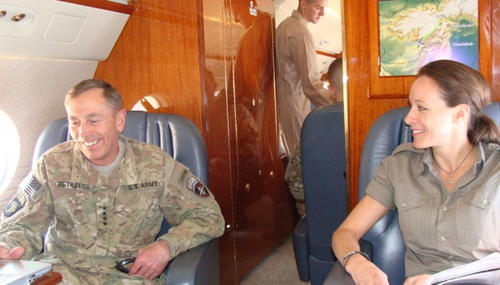 Tim Graham
November 21st, 2012 8:37 AM
Peter Nicholas of The Wall Street Journal is playing dumb. He played it straight when When Politico’s Mike Allen asked Obama campaign manager Jim Messina “which Republican would have had the best shot at beating your boss?” and Messina said Jon Huntsman. “We were honest about our concerns about Huntsman,” Obama campaign manager Jim Messina said at a Politico… 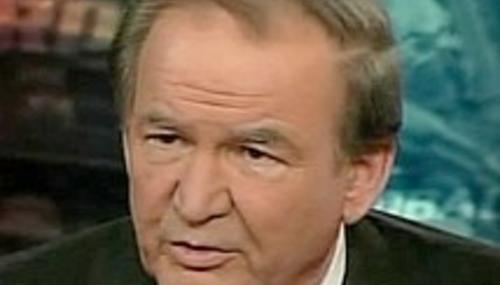 Noel Sheppard
May 29th, 2012 12:45 AM
In 2008, Barack Obama with obedient media members such as New York magazine's John Heilemann convinced America that if they put their hope behind a junior senator from Illinois, their lives would instantly change for the better. Now that things didn't turn out as rosy as these folks claimed they would, the White House needs to scare the public into thinking things would be far worse…

Tim Graham
December 31st, 2011 7:29 AM
Ed Morrissey at Hot Air put it best on the latest Obama campaign video: "You know, nothing says classy in a presidential campaign like having to bleep out a word from the national campaign manager in a prepared video." Campaign manager Jim Messina tells supporters it's "bulls---" that Obama will run a "billion-dollar campaign." In the shadow of Occupy Wall… 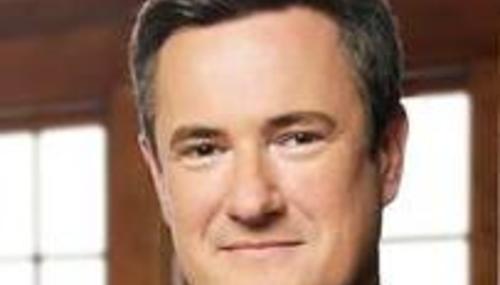 Aubrey Vaughan
July 14th, 2011 3:53 PM
It's no secret that most campaigns are heavily funded by big checks from lobbyists, PACs, and rich donors, but President Obama's campaign team is turning away from that assertion, instead showcasing the claim that it is 98-percent-funded by grassroots support. Jim Messina, Obama's campaign manager, said "we did this from the bottom up," pushing the idea that the $86…