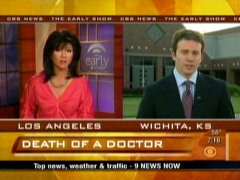 Reporting on the murder of Kansas abortion doctor, George Tiller, on Monday’s CBS Early Show, correspondent Jeff Glor touted the doctor’s career, while not depicting it as controversial: "...a doctor in the middle of the abortion debate for 35 years...Tiller, one of only a handful of doctors in the country performing late-term abortions, when the mother's health is at risk." Glor later commented about the murder: "Abortion providers feared a chilling effect."

At the top of the segment, co-host Julie Chen declared: "President Obama says he is shocked and outraged at the murder of Dr. George Tiller, one of the few doctors in the country who provided late-term abortions." Following Glor’s report, Chen spoke with Tiller’s friend and attorney, Dan Monnat, and wondered: "Can you explain why Dr. Tiller continued his practice all these years, despite all the harassment?" Monnat portrayed Tiller as courageous: "Both Dr. Tiller and his family continually asked the question, if Dr. Tiller is not here to serve a woman's right to choose, who will be here to do it? There are only a handful of late-term abortion providers that remain in the United States, and in the world. Most of them have been terrorized and run off by the protesters."

The Early Show coverage made no mention of Tiller’s controversial career, including a recent investigation into whether he conducted 19 illegal partial-birth abortions.

As if you couldn't see this coming...

Fresh off the Daily Kos website is a posting entitled, A "Pro-Life" activist took the Life of a doctor who practices abortion today, which illogically takes two sentences to link the murderer to the likes of Rush Limbaugh, Sean Hannity and Glenn Beck (emphasis mine throughout).

A so-called Pro-Life activist took, cowardly, the life of doctor George Tiller, this sunday, while he was attending to a church service. I bet Rush Limbaugh, Glenn Beck, Sean Hannity and the other will praise the killer since "he only killed a liberullllllll" according to them

Grammatical issues aside (something that the Kos seemingly requires from their writers), the incredible leap from the death of George Tiller, to three leading conservative talk show hosts is shocking to people who make their home here on Earth.  Four conservative talk show hosts actually, if you consider the phrase ‘and the other', which would presumably be referring to Michael Savage.

More stunning is that this posting was allowed to present the statement - "he only killed a liberullllllll" according to them - as if it is a quote drawn from one of their shows.  I would challenge the author, LaurenMonica, or anyone at the Daily Kos to present an audio copy of any of these conservative talk show hosts in which they heap praise upon a killer because, "he only killed a liberullllllll".  (On a side note, I also challenge them to present a college transcript which shows they were able to pass English Composition 101).

Of course, this isn't where it stops with the liberal blogs.

How Long Will It Take Media To Tag Tiller Murderer As Not Part of Prolife Movement?

Steven Ertelt at LifeNews.com is telling us more about the alleged murderer of Kansas abortionist George Tiller than establishment media news sources (bold is mine):

Authorities have apprehended a Kansas man suspected of killing late-term abortion practitioner George Tiller on Sunday morning at his church. Police have identified the man as 51-year-old Scott Roeder of Merriam, Kansas and he has been detained but has not yet been officially charged.

As has been the case with most previous incidents of abortion-related violence, Roeder appears to have an affiliation with extremist political groups but not with the mainstream pro-life movement.

Pro-life groups have quickly and genuinely condemned the Tiller shooting.

News editors need to retake Journalism 101 or move to features when stories about the White House dog take precedence over a controversial veto by the President's unconfirmed appointment to Secretary of Health and Human Services.

With the exception of "Special Report with Bret Baier" that night and "Fox and Friends" the morning of April 24, the broadcast media avoided covering the controversial decision. But "Today," "The Early Show," and "Good Morning America" all had time to cover Michelle Obama talking about the first family's new dog Bo the morning of April 24.

"President Obama's nominee for health secretary received nearly three times as much political money from a controversial abortion doctor as she had told senators," the Associated Press is reporting, noting that this marks "the second time in her confirmation process" that Gov. Kathleen Sebelius (D-Kansas) "had to explain a financial oversight" to the Senate Finance Committee.

A notorious abortion doctor that specializes in grisly late-term procedures is heading to trial at the same time a politician he contributed to and socialized with is awaiting confirmation as President Obama’s Health and Human Services Secretary. Interesting story? Not to the Associated Press.