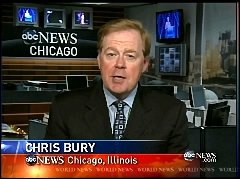 Katie Couric’s CBS Evening News on Friday omitted any mention of the murder of pro-life activist Jim Pouillon in Michigan, despite having discussed the murder of abortionist George Tiller on the June 1, June 2 and June 9 newscasts (and then referencing the killing as a recent “hate crime” in a June 10 report on the shooting at Washington, D.C.’s Holocaust Museum).

Both ABC’s World News and the NBC Nightly News, in contrast, offered full reports on the killing of Pouillon and a local businessman, but offered different explanations. According to NBC’s John Yang, prosecutors said the killer, Harlan Drake, had grudges against his victims and another intended target but “none of them were specifically related to anti- or pro-abortion beliefs.”

Over on ABC, however, reporter Chris Bury showed a soundbite from the Owosso police chief that sure sounded like a grudge against Pouillon’s protests: “Mr. Drake did not believe the children should view the graphic material that was on the signs that Mr. Pouillon carried.”

And ABC’s Bury claimed Friday’s killing of the peaceful protester represented “the flip side of the troubling violence surrounding the abortion debate,” and equated the pro-life activist with the doctor who performed late-term abortions: “George Tiller and Jim Pouillon, on opposite sides of the abortion divide, but both victims of the hate that too often surrounds it.”

Actually, if the amount of coverage they mete out is a reliable guide, liberal journalists seem to really think that the abortionist is more important than the activist arguing against abortion.

The transcript of the report on the September 11 World News with Charles Gibson: 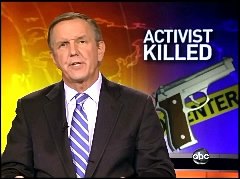 CHARLES GIBSON: In other news today, an anti-abortion activist was shot and killed in Michigan. Police have arrested and charged a suspect. The victim was protesting outside a high school in Owosso, Michigan, when he was gunned down. He was a familiar and polarizing figure around town, and is now part of the national fury over the abortion debate. Here's ABC's Chris Bury.

CHRIS BURY: In his Michigan town, Jim Pouillon was known above all for displaying graphic pictures of aborted fetuses. Today, the anti-abortion activist was shot dead in front of the high school where he was protesting. Police say the captured suspect, Harlan Drake, also gunned down a businessman and planned to kill a third man.

OWOSSO POLICE CHIEF MICHAEL COMPEAU: Mr. Drake did not believe the children should view the graphic material that was on the signs that Mr. Pouillon carried.

PATRICK MAHONEY, CHRISTIAN DEFENSE COALITION: An American citizen has been gunned down on 9/11 for exercising their First Amendment speech, and the Attorney General and the White House have said nothing.

BURY: A Justice Department official told ABC News, quote, 'We are saddened by the tragic events and are monitoring the state investigation.'

BURY: Today's Michigan killing represents the flip side of the troubling violence surrounding the abortion debate. In June, Wichita doctor George Tiller, one of the few physicians who performed late-term abortions, was shot to death in his church. Anti-abortion leaders demanded federal investigators give today's killing equal treatment.

MAHONEY: Please make the same committment that you did when George Tiller was killed.

BURY: George Tiller and Jim Pouillon, on opposite sides of the abortion divide, but both victims of the hate that too often surrounds it. Chris Bury, ABC News, Chicago.