Goldberg and Walters Think Clintons Are Too Harsh on David Shuster

David Shuster’s suspension was a topic of discussion on the February 11 edition of "The View," as at least Barbara Walters and Whoopi Goldberg disagreed with the Clinton campaign for demanding an even harsher punishment for Shuster. Walters first expressed mixed feelings that many people rely on "The View" for news adding "sometimes we’re very wonderful and very accurate and sometimes we’re not."

MRC director of media analysis Tim Graham appeared on "Hannity & Colmes" on Friday night to discuss the David Shuster suspension over his suggestion that Chelsea Clinton was being "pimped out" by Hillary. Sean Hannity and Alan Colmes insisted both that Shuster was (a) dreadfully wrong and yet (b) over-punished for a verbal miscue. (FNC's transcript is here.)

Both hosts suggested that Tim was defending Shuster, which he denied. "Chelsea Clinton now is 27 years old. She is not the 13-year-old that moved into the White House. And the problem that — we have a much greater problem in the United States today — that she's been treated....with such an adoring tone. They really treat her like Saint Chelsea." Tim also said MSNBC had a double standard between Shuster and far wilder comments from Keith Olbermann: "Keith Olbermann could come on and say that Bush is responsible for killing 3,500 Americans. Or remember when he called Chris Wallace a monkey posing as a newscaster?"

As NewsBusters has been reporting, MSNBC's reaction to David Shuster's "pimped out" Chelsea Clinton comment is an extraordinary example of the double standard that exists at this admittedly left-leaning cable network.

In fact, the goings-on since Shuster first made this remark last Thursday make it crystal clear that potentially insensitive comments directed at the Clinton family are thoroughly verboten by MSNBC, whereas derogatory statements concerning President George W. Bush are highly encouraged.

The "pimped out" controversy surrounding MSNBC's David Shuster - destined to be called "Pimp Gate" - took a turn for the bizarre when Democrat presidential candidate Hillary Clinton sent a letter to Steve Capus, President of NBC News.

Published for all to see at the Washington Post's "The Trail" blog Saturday, the letter demonstrated a disturbing number of hypocrisies and double standards inherent in today's liberally biased media.

See if you can find them all (emphasis added to assist your search):

Should Olbermann Apologize for Accusing Bush of Pimping Petraeus?

As NewsBusters readers are fully aware, MSNBC's David Shuster has apologized and been suspended for asking a guest on Thursday's "Tucker," "[D]oesn't it seem like Chelsea [Clinton's] sort of being pimped out in some weird sort of way?"

David has been suspended and remains only for me to apologize without limit to President Clinton and to Ms. Clinton on behalf of MSNBC. We are literally, dreadfully sorry.

If MSNBC is so sorry for Shuster's use of this phrase, shouldn't they be suspending Olbermann for a similar comment he made about President Bush and Gen. David Petraeus on September 20 (video available here courtesy of our friend Johnny Dollar, relevant section begins 55 seconds in, although readers are strongly encouraged to watch the entire delicious piece):

As the blogosphere picks up with talk of David Shuster's remark about "pimped out" Chelsea Clinton, something should be made clear. The media spent the 1990s using Chelsea and Gore kids to improve the public image of the Clintons and the Gores. When someone (like Al Gore III) misbehaved by speeding at 90 MPH, the media covered up. But they used young Al to burnish old Al for all those high school football games he attended as a devoted dad. See this NRO piece from 2000.

Shuster: Chelsea Being 'Pimped Out'

Appearing on Tucker Carlson's show a few days ago, Hillary fan Lanny Davis observed that Tucker's is "about the only show on MSNBC that consistently allows a Clinton perspective to be expressed." But maybe not so much when, as this evening, David Shuster is the guest host. Employing one of the more graphic metaphors to be heard about a Clinton from the MSM, Shuster tonight claimed that Chelsea Clinton is being "pimped out" by her mother's campaign.

The jumping off point was a clip in which three members of The View mentioned having been called by Chelsea on behalf of her mother. Shuster's guests were Dem pundit Bill Press and columnist Bob Franken.

Joy Behar: McCain 'Very Conservative in All His Policies'

Is ABC "View" co-host Joy Behar so far out of the political mainstream that she has a skewed sense of what entails a "liberal" and a "conservative?" The same woman who called Hillary Clinton and Barack Obama "very moderate" on the February 7 show, John McCain has "been very conservative in all his policies." Apparently anyone who does not march lockstep with NARAL is an arch-conservative, as Behar explained that McCain is "so conservative b 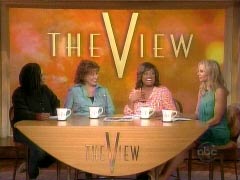 Does Chelsea Clinton have the ears of three of "The View" co-hosts? According to Joy Behar’s, Whoopi Goldberg’s, and Sherri Shepherd’s accounts, Bill and Hillary Clinton’s daughter canvassed them for her mother’s vote. Unfortunately for Clinton campaign, it was too late as all three of them voted before the call.

ABC reporter Kate Snow continued her long history of delivering generous Clinton spin during a segment on Friday's "Good Morning America." The GMA correspondent followed Chelsea Clinton as the former first daughter campaigned for her mother, repeating talking points along the way. Snow announced, "To be honest, [Chelsea] doesn't like cameras much. She let us tag along, but takes no questions." Later Snow repeated, "She doesn't want to be in the spotlight." The ABC reporter, who often covers the Clintons, didn't ask the obvious question: If Chelsea doesn't like the spotlight or cameras, why, exactly, did she allow ABC to follow her around with a camera crew?

GMA did balance the piece on the Clinton daughter with a sympathetic take on Mike Huckabee's wife, Janet. (At one point, reporter Claire Shipman asked about Mike Hucakbee's "legendary guitar playing.") However, Snow has developed a pattern of vigorously lauding the actions of various Clintons. On January 7th of 2008, she praised Hillary Clinton for seemingly ordinary actions. "No subject is too small. No issue too dense," Snow raved.

In the battle of Democratic "superstar campaigners," the reporters of "Good Morning America" couldn't decide whether they prefer Hillary Clinton's exciting surrogates or Barack Obama's. On Monday's edition of the ABC program, correspondent David Wright parroted talking points about Oprah Winfrey supporting Obama and the inspiring nature of the talk show host. He glowingly asserted, "She's urging her fans to vote the dream, not just to settle for the inevitable." Wright didn't bother to explain what, exactly, that means.

The GMA reporter also gushed that "...When it comes to connecting a crowd over shared hardships and shared hopes, nobody beats Oprah." According to Wright, she's "kind of like everybody's big sister." Kate Snow, filing a piece on the Clinton campaign, explained that operatives at "Hillaryland" sent Bill and Chelsea Clinton to Iowa in order to manipulate media coverage away from Obama. Snow shamelessly confessed, "And it worked. We're not just talking about Oprah this morning, are we?"

CNN’s Begala Returns to Smearing Limbaugh for Past OxyContin Use 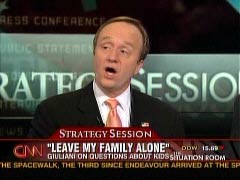