Throw Carol Browner Under the Bus

Energy czar Carol Browner needs to go the way of disgraced green jobs czar Van Jones: under the bus and stripped of her unbridled power to destroy jobs and lives in the name of saving the planet. ASAP.

One of the Beltway's most influential, entrenched and unaccountable left-wing radicals, Browner has now been called out twice by President Obama's own federal BP oil spill commission and Interior Department inspector general. How many strikes should a woman who circumvented the Senate confirmation process and boasts a sordid history of abusing public office get?

During the Bush administration, the media made much of political appointees supposedly editing and otherwise interfering with the integrity of the work of career federal government scientists, particularly on studies pertaining to global warming/climate change.

Well now the Associated Press is reporting that an inspector general's report from the Interior Department released yesterday found that the Obama White House "edited a drilling safety report in a way that made it falsely appear that scientists and experts backed the administration's six-month moratorium on new deep-water drilling." (emphasis mine)

Additionally, "Obama's energy adviser, Carol Browner, mischaracterized on national TV a government analysis about where the oil went, saying it showed most of the oil was 'gone.'"

In fact, "[t]he report said it could still be there," AP's Dina Cappiello noted.

Cappiello's story was buried on page A27 of today's Washington Post, but at least the paper covered the story. A Nexis search for "BP" mentions in the November 11 paper turned two hits from the New York Times, but neither story was about the inspector general's report.

It’s not every day that a front-page Washington Post report has copy that can be mocked as “Auditioning to Be the Next Obama Girl.” (That is, unless you count Eli “Obama's Chiseled Pectorals” Saslow.) James Taranto of The Wall Street Journal designated this florid passage for that title, from a sprawling 5,355-word Wednesday front-page article by reporters Michael Leahy and Juliet Eilperin.

The moment was vintage Obama -- emphasizing his zest for inquiry, his personal involvement, his willingness to make the tough call, his search for middle ground. If an Obama brand exists, it is his image as a probing, cerebral president conducting an exhaustive analysis of the issues so that the best ideas can emerge, and triumph.

Slogging through the entire article (eating up all of two inside pages) demonstrates that the Post reporters were praising Obama’s “zest” and thoughtfulness even as they summarized how Obama, in their view, struck too “centrist” a path by supporting offshore drilling and stiff-arming the Left – which Leahy and Eilperin never identify as liberals, merely as “environmental activists.” The Post reporters say Team Obama was trying to find a “grand bargain” to pass a “climate-change bill.”

No matter what happens, even surrounding his personal life or his pet cause global warming, former Vice President Al Gore just isn't going away.

During an Aug. 10 conference call, Gore launched into a critique of the media's recent coverage of ClimateGate, specifically blogs, talk radio and "biased right-wing media."

"Well I believe Mark Twain often gets the credit for the saying ... that a lie runs around the world before the truth gets its boots on," Gore said. "Now I'm not sure that's the real reason for it, but there is a sad but undeniable truth that those who wanted to try sowing confusion used an echo chamber from blogs and talk show hosts and biased right-wing media to promulgate the distortions of the paid skeptics and professional deniers who tried to undermine the evidence."

Gore, who earlier during the call said he all but given up on cap-and-trade legislation being passed this Congress (audio here), alluded to a handful of "formal inquiries" that he argued cleared the science of any doubt that may have been caused by the leaked e-mails from ClimateGate, despite the questionable circumstances surrounding these inquiries. 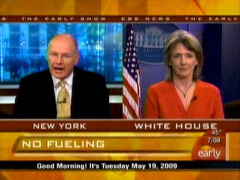 While reporting on the Obama administration’s plan to impose higher fuel standards on cars and trucks on Tuesday’s CBS Early Show, co-host Harry Smith asked Obama environmental advisor Carol Browner: "As a former long-time administrator of the EPA, how overdue is this?" Browner replied: "It is long overdue. You know, Congress stood in the way of tougher fuel economy standards for a long time. That finally was fixed."

Smith did question the higher price of cars for consumers that would result from the tougher standards: "With the added price tag cost to these average vehicles, and much higher -- higher gas mileage and fewer emissions, what is my incentive, what is my dollar incent – incentive to buy a car like this?" Browner argued that consumers would save money in the long-run due to better gas mileage: "...whether you want to buy a bigger car or a smaller car, they will all be more efficient, and cleaner. So we're preserving the consumer choice, but giving every consumer the opportunity to save money at the pump." Smith replied: "Will SUVs and pickup trucks go the way of the dinosaur, though?"

I guess President Josiah Bartlet, the mythical president in The West Wing television series, would have been pleased.

Jonathan Martin at Politico.com reports that the Obama Administration is concentrating lots of power at the top (bolds are mine):

Not even a week has passed since he was sworn in, but already Obama is moving to create perhaps the most powerful staff in modern history – a sort of West Wing on steroids that places no less than a half-dozen of his top initiatives into the hands of advisers outside the Cabinet.

Hysterical Hansen Hype: Obama 'Has Four Years to Save Earth'

This is a hopefully good news, bad news post.

First, the bad news: James Hansen, head of NASA's the Goddard Institute of Space Studies is still bloviating about the catastrophes that await us because of what yours truly and others refer to as globaloney (the belief that the earth is dangerously warming, that human activity is the cause of the warming, and that radical steps that would cause huge reductions in standards of living around the world are required to save the planet from extinction). Reporter Robin McKie carries Hansen's latest "we'd better act or else" warning at the UK Guardian.

The hopefully good news is that Hansen's warning is thus far getting very light press coverage. A 9:45 a.m. Google News search done on "Hansen climate" (not in quotes) for January 16-18 came back with all of 24 items (the first page of results says there are 267, but there are really only 24.

Here are the first five paragraphs of McKie's article, if you can bear reading them (bolds after title are mine):

He's reviled by the left for carrying the water in the U.S. Senate for those who are skeptical of manmade global warming - and that may have been enough to put him over the top for MSNBC's Keith Olbermann's "Worst Person in the World" award.

On the Jan. 14 broadcast of MSNBC's "Countdown with Keith Olbermann," Olbermann cited an appearance by Inhofe on Fox News' Jan. 14 "America's Newsroom" with host Megyn Kelly to discuss the appointment of Carol Browner to be President-elect Barack Obama's new climate czar.

When president-elect Barack Obama appointed Carol Browner to be his "energy czar" back in December, the conservative blogosphere was buzzing about her being a member of Socialist International, "the worldwide organisation of social democratic, socialist and labour parties."

At the time, she was fourth on the website's list of members in the "Commission for a Sustainable World Society."

Not any longer, although it still is cached by Google (h/t Steven Milloy):

An environmentalist's dream might be a businessman's nightmare. But when it came to describing the the environmental team Pres.-elect Obama has assembled, it was sugar plum fairies for GMA this morning.  Rachel Martin, who came to ABC from NPR, narrated the segment.

RACHEL MARTIN:  They are calling it the "Green Dream Team."

Which invites the obvious question: who's "they," kimosabe?  Running down the team line-up, Martin viewed things from an environmentalist perspective.

Kernen: Energy Czar Browner is 'Scary' during 'Once in a Lifetime Recession'

President-elect Barack Obama named Carol Browner the "czar" of climate and energy policy for the White House, but CNBC's Joe Kernen was wary of her appointment.

"You can see that even in Europe, some of the climate concerns, given this, this once in a lifetime recession, John - to put someone that, an advocate of such strong measures," Kernen said on "Squawk Box" Dec. 11. "Really I've seen her called Brownies or Brownistas. Um. That's a little scary with what's happening right now."