Lauer: Shame On Dems For Not Sticking Up For Kerry 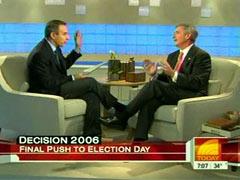 Inured as we are to MSM bias, this one was still stunning. A leading MSM member uses the airwaves to scold Democrats for being insufficiently loyal to a leading party light.

Former Bush Chief of Staff Andy Card was Matt Lauer's guest on this morning's 'Today.' Matt was intent on wangling from Card an admission that the Kerry comments were a mistake:

Lauer first offered his personal analysis: "He made a joke and he said he blew the joke and it sounded as though he questioned the intelligence of U.S. troops in Iraq."

He then demanded of his guest: "Look me in the eye and tell me with even a fraction of your heart you think John Kerry meant to question the intelligence of U.S. troops in Iraq."

While opining that "it was a joke that went bad," Card pointed out that Kerry "has had a past bias that would allow people to believe" that he meant to insult the troops. He reminded Matt that Kerry threw his medals away and mentioned that "members of the military were offended by what he said."

After Lauer played a clip of Pres. Bush discussing Kerry's comment in a stump speech, he asked whether the president was trying to take "political advantage."

Card: "I think it's taking words that were in the public domain and calling attention to them. . . . But it's the Democrats that said 'John Kerry stay home.'"

That's when Lauer took his shot:

"I think a lot of Democrats should have shame on their shoulders this morning because they ran away from this guy as opposed to standing up and saying it was just a mistake."

And here I thought enforcing Democrat party loyalty was Howard Dean's job. Well, Katie moved on to other things, and many Dems are dissatisfied with Dean. Could there be a career move to the DNC in Matt's future?

Aside: Hillary surely won't be pleased by Lauer's remark. Not content in a public statement to label Kerry's comments "inappropriate," she wrote him off as "the past," saying no one wants to "replay 2004": i.e., have Kerry as the Dem candidate. Ouch!

Mark Finkelstein lives in Ithaca, NY. He will be reporting for MRC from Baghdad and Fallujah later this month.. Contact Mark at mark@gunhill.net