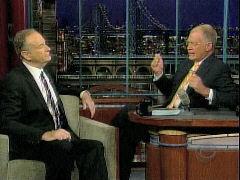 David Letterman treated FNC's Bill O'Reilly and conservative views with disdain as the two got into a bit of tempest when O'Reilly last appeared on the Late Show back on Tuesday, January 3, as detailed in my NewsBusters post of the time (with video), “Letterman Denounces Iraq War, Sheehan Critics.” O'Reilly will be a guest again on tonight's (Friday) show which was, oddly, taped on Monday and thus allowed Letterman to talk about it a bit on Thursday's program. Letterman hasn't gained any admiration for O'Reilly in the past ten months, as demonstrated by how he recalled: “The last time he was on the show I caught him lying. And I said to myself, well you better do something, you just can't sit here and let this guy lie, so I jumped all over him and there was a bit of a dust-up.” Letterman also revealed his strategy for the interview: “He's a blowhard, I'll be a blowhard too. So when he comes out what I do is I attack him. And I just make a fool of myself and, of course, I have no idea what I'm talking about and neither does he.” (Summary of Letterman's remarks back in January follow.)

Update, 8:15pm EDT: The Late Show Web site has posted (on its "Big Show Highlights" page) a 3:39 streaming Real video from Friday's show of a very heated argument between O'Reilly and Letterman, with some insults from Letterman, over Iraq.

An excerpt from the top of the January 3 NewsBusters posting:

Displaying a hostility to President Bush and the Iraq war similar to that expressed by Comedy Central’s Jon Stewart, on Tuesday’s Late Show David Letterman went further than I’ve ever heard him in revealing his derision for President Bush’s decision to launch the Iraq war and contempt for anyone who dares to criticize Cindy Sheehan.

Letterman normally tries to make the guest look as good and entertaining as possible. But he greeted FNC’s Bill O’Reilly with disdain. When O’Reilly urged an end to tagging Bush as a “liar,” scolded Cindy Sheehan for calling the insurgents “freedom fighters” and urged people to be “very careful with what we say" in disparaging others, Letterman took him to task: "Well, and you should be very careful with what you say also." Letterman demanded: "How can you possibly take exception with the motivation and the position of someone like Cindy Sheehan?" And he tried to discredit O’Reilly’s contention: “Have you lost family members in armed conflict?" When O'Reilly conceded that "no, I have not," Letterman castigated him: "Well, then you can hardly speak for her, can you?"

Letterman mockingly recalled: "The President himself, less than a month ago said we are there because of a mistake made in intelligence. Well, whose intelligence? It was just somebody just get off a bus and handed it to him?" Letterman demanded: “Why the Hell are we there to begin with?" When O’Reilly pointed out that the British, Russians and Egyptians also presumed Iraq had WMD, Letterman retorted: “Well then that makes it all right?" Turning unusually serious, Letterman soon lectured: “I'm very concerned about people like yourself who don't have nothing but endless sympathy for a woman like Cindy Sheehan. Honest to Christ. Honest to Christ." That prompted O’Reilly to contend: “No way a terrorist who blows up women and children is going to be called a ‘freedom fighter' on my program." To which Letterman fired back: “I have the feeling about 60 percent of what you say is crap.”

See the link at the top of this posting for the full article, with video.
Iraq CBS