Sawyer's Sigh to Gore: 'Too Late to Stop Global Warming?' 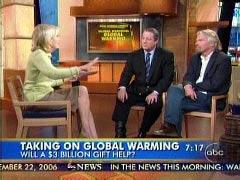 This is shaping up as a day for lefty unilateralism.  As noted here, liberal LA Times columnist Rosa Brooks saw no nuance in her Bush-hatred fueled tirade against any expansion of permitted techniques in interrogating terrorists.

Later, Good Morning America staged a global warming love-in, in which nary a dissenting voice was heard and the only question was whether it was too late to implement Al Gore's costly nostrums.

Diane Sawyer's guests were Gore and British magnate Richard Branson.  The proximate cause was the announcement that over a recent breakfast, Gore managed to convince Branson to devote 100% of the profits from Virgin Airlines to the effort against global warming [someone check the OJ for Grey Goose].

Naturally there was no need to hear from anyone suggesting that global warming could largely be the result of epochal climate changes rather than man-made causes.  At one point, Diane rolled footage of melting icebergs in the Arctic and lamented that polar bears now have to "swim for their lives."  Asked a distressed Diane: "Is it too late?"  Gore assured her it wasn't, so long as we quickly got on his bandwagon.

Sawyer said she would play the "devil's advocate" and for a moment you thought that perhaps she was about to question Gore's scientific assumptions.  But no. Instead she challenged Branson to give up private planes, which she described as "big users of fuel."  While suggesting that private plans could be taxed more heavily, Branson largely deflected the question.  Instead, he suggested that domestic [presumably commercial] flights should be taxed more heavily if there is a train available on the same route.   And he called on goverments to "encourage" the manufacture and use of ethanol-burning cars.  Got it?  Let the plebes pay more to fly the shuttle from DC to NYC, and have them putt-putt along in their Priuses.  Sir Richard will continue to fly the friendly skies in his private jet.  Gore remained stonily silent on the issue.  No point in teeing off his high-flying Hollywood friends.