Chris Matthews to Green Candidate Calling for Bush Execution: 'I Like You Already' 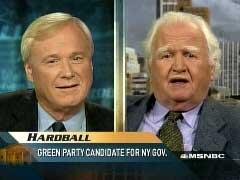 Matthews: "Look, let me ask you this. Where are you on capital punishment?"

Malachy McCourt: "Capital punishment? I think that if, if I've got to find that guy in Spain who indicted Pinochet and get him for war crimes, and I get him to do the same thing for Bush. And in that case, I would be for capital punishment. Otherwise, I am against it. Spitzer, who is the other guy running here, he is for capital punishment for those who kill policemen. Well, my son is a cop in New York, and if somebody killed my son, and it wouldn't do me any good or give me any satisfaction to sit there in some death house in Sing Sing and watch them put some other person to death because they killed my son. That would not cheer me up one bit, Chris."

Matthews, smiling: "You just sound like a liberal Democrat, Malachy."

Not only did Matthews not challenge Malachy's heinous remark he actually smiled after his rant. In fact Matthews seemed charmed by McCourt as he ended the segment minutes later: "Well, I had to tell you, I hereby make my stand, I like you already. Malachy McCourt, Green Party candidate."