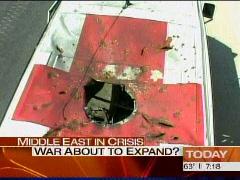 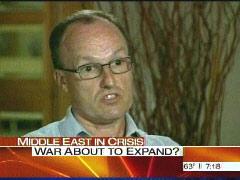 There appeared on screen the image of a Red Cross vehicle. And sure enough, smack in the middle of the Red Cross on the roof was a gaping hole. The clear implication was that this was the result of Israeli fire. But can we be blamed for wondering whether this was evidence of near-miraculous Israeli marksmanship . . . or clever staging by Hezbollah or its sympathizers? 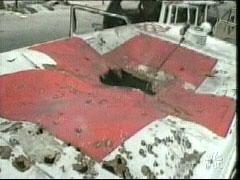 Question for military experts: if a shell of a size corresponding to the hole pictured in the photo had pierced the vehicle's roof, how likely is it that the remainder of the vehicle would have remained intact, as it apparently is?

For over a week now, blogs have called the authenticity of this type of photo into question. See also here. Did Today undertake independent analysis to confirm the truth of what it was showing, or did it intentionally, or with reckless disregard for the truth, propagate Hezbollah propaganda?

As to the Red Cross's alleged 'neutrality', in fact the international Red Cross has a long history of a less-than-friendly attitude toward Israel, only recently admitting it to membership after a boycott that had lasted since Israel's founding. And Little Green Footballs has an item asserting that the Red Cross is openly helping Hezbollah.