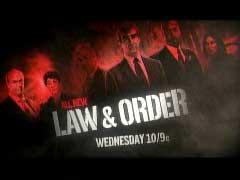 A “liberal” culprit on Wednesday's Law & Order on NBC? On tonight's episode, “the Chief of Staff to a liberal politician” seems “to be responsible for tipping off” a reporter about the identity of an undercover cop who is then murdered. The politician is the fictitious “Congressman John Prescott,” played by “guest star David Forsyth.” So, that's unlike how Law & Order's sister program, Law & Order: Criminal Intent, a year ago portrayed then-House Majority Leader Tom DeLay, by name, as a hero to white supremacist gun nuts suspected of murdering two judges, one of them black, and who had expressed the view that the white woman judge who was murdered was a "race traitor." When the ballistics on the bullet which killed the black judge showed it was fired by the same rifle which was used to kill the white judge, New York City Police Department "Detective Alexandra Eames" suggested to her fellow detectives and an Assistant District Attorney: "Maybe we should put out an APB for somebody in a Tom DeLay T-shirt." For a full transcript of the scene, MP3 audio as well as Real and Windows Media video, check the May 26, 2005 MRC CyberAlert.

From NBC's Web page for Law & Order, the plot outline for the May 3 episode airing at 10pm EDT/PDT, 9pm CDT/MDT:

“SLAYING OF UNDERCOVER POLICE OFFICER LEADS DETECTIVES TO POLITICIAN'S RUTHLESS CHIEF OF STAFF -- An undercover police officer is brutally murdered by an Albanian drug dealer after her identity is revealed in a newspaper column concerning the victim's father. Detectives Fontana (Dennis Farina) and Green (Jesse L. Martin) quickly discover Eric Lund (guest star Garret Dillahunt), the Chief of Staff to a liberal politician (as Congressman John Prescott, guest star David Forsyth), to be responsible for tipping off the reporter. A.D.A Jack McCoy (Sam Waterston) bravely prosecutes the politico who is known for dirty tricks and threats, but despite D.A. Arthur Branch's (Fred Dalton Thompson) warning to watch his back, unexpected evidence suddenly turns up that could exonerate the accused...”