ABC & NBC Focus on Exxon Profits, Skip How Government Gets More in Taxes 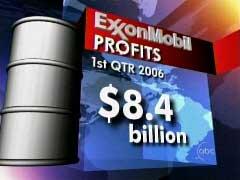 The broadcast network evening newscasts on Thursday night hyperventilated over “record” profits for ExxonMobil, but failed to point out how government taxes exceed oil company earnings. ABC even fretted about how much ExxonMobil “spent rewarding shareholders,” though it was less than the federal government took in taxes, and NBC excoriated the company for “cashing in” at 9.5 cents per dollar.

“Today, ExxonMobil reported profits of $8.4 billion for the first three months of this year, its best first quarter ever,” ABC anchor Elizabeth Vargas asserted at the top of World News Tonight before Betsy Stark complained: “The company says that's a record level of investment in new supplies. Maybe so, but it's less than it spent rewarding shareholders. 15 percent of profits went directly to shareholders in the form of cash dividends, and the biggest chunk, 40 percent, was used to repurchase Exxon's own stock." But ExxonMobil paid 83 percent as much as the $8.4 billion it earned, $7 billion, $2 billion more than a year earlier, in just federal income tax -- and a lot more in other taxes.

Over on the NBC Nightly News, anchor Brian Williams promised, in his tease, “a reality check on sky-high oil company profits,” but all Lisa Myers delivered was demagoguery. Myers began by charging that “for outraged consumers, the staggering profit numbers boil down to this: Exxon earned 9.5 cents on every dollar of gasoline and oil sold, cashing in at every stage of the process." Yes, ExxonMobil cashed in by investing and working to get their product to the retail customer while the federal government collected 18.4 cents per gallon in tax for doing nothing. Federal, state and local taxes total an average of 46 cents per gallon -- significantly more than the 28 cents Exxon earned on a $3 gallon of gas. (Transcripts follow.)

Without any mention of barriers put up by environmentalists, Myers also relayed how “consumer groups argue that oil companies are profiting unfairly from their own failure to invest in refineries, which is now driving up gas prices."

The CBS Evening News held its coverage of ExxonMobil's profits to the tease and introduction of its lead story on comments from the Fed Chairman and the latest silly pandering ideas from politicians. Anchor Bob Schieffer teased:

"I'm Bob Schieffer. A big day for ExxonMobil as it marks another record profit. But will rising gas prices set off inflation again? That's what economists are wondering."

"Good evening. And there are no surprises tonight. Gas prices are still going up, and so are profits for ExxonMobil. The world's largest publicly traded oil company set another record. Profits of $8.4 billion dollars for the first three months of the year, the company's best ever first quarter. The big part of that comes from overseas sales, but economists still wonder what the impact is going to be on the economy of this country. That was the question when the Chairman of the Federal Reserve went to Capitol Hill today. Here's Byron Pitts."

In his Thursday afternoon NewsBusters posting on morning show coverage of ExxonMobil's anticipated first quarter earnings report, “Networks Ignore How Big Government Rakes In More than Big Oil,” the MRC's Rich Noyes recounted: “Unstated in the network coverage was the fact that the U.S. government took in more than $7 billion [in income tax] from ExxonMobil during the first quarter of 2006, a jump of more than $2 billion from the same time period in 2005. And that doesn’t count the more than $7.6 billion in excise taxes -- the gas tax -- that ExxonMobil collected for the government during the same quarter. Plus another $11 billion in 'other taxes' and ExxonMobil sent the government more than $25 billion in the first quarter of 2006 -- three times more than the amount [$8.4 billion] network reporters seem to feel is obscene.”

An October, 2005 Tax Foundation analysis, “State and Federal Treasuries 'Profit' More from Gasoline Sales than U.S. Oil Industry,” reported: “Federal and state taxes on gasoline production and imports have been climbing steadily since the late 1970s and now total roughly $58.4 billion. Due in part to substantial hikes in the federal gasoline excise tax in 1983, 1990, and 1993, annual tax revenues have continued to grow. Since 1977, governments collected more than $1.34 trillion, after adjusting for inflation, in gasoline tax revenues -- more than twice the amount of domestic profits earned by major U.S. oil companies during the same period.”

Now, as provided by the MRC's Brad Wilmouth, who corrected the closed-captioning against the video, the April 27 ABC and CBS coverage of ExxonMobil's earnings:

"Good evening. We begin with the rising oil pressure in the United States, fast becoming the country's economic and political priority. For oil companies, the economics could hardly be better. Today, ExxonMobil reported profits of $8.4 billion for the first three months of this year, its best first quarter ever. For consumers and politicians, it's more complicated. President Bush took time out on his trip to the Gulf Coast today to stop at a gas station, where he said high prices are like a new tax on working Americans. But as ABC's Betsy Stark explains, there is little agreement on how to find a solution."

Betsy Stark: "In Washington today, it was hard to find a politician who wasn't talking about gas prices.” 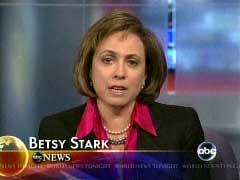 Stark: "The proposals ranged from a federal gas tax holiday and $100 rebate checks for drivers to a bill that would reward commuters who switch to bikes. But Fed Chairman Ben Bernanke, making his own appearance on Capitol Hill, said there are no quick fixes."

Stark: "While Washington debated how to get gas prices down, on Wall Street it was clear, once again, how profitable high gas prices are for the big oil companies. The $8.4 billion in profits ExxonMobil reported today was its best first quarter ever. The company declined to talk to us on camera today, but the world's biggest oil company seemed to expect there would be questions about how those profits will be spent. It placed ads in several major newspapers today highlighting the billions Exxon is spending around the world to develop new energy supplies. 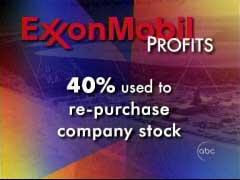 But according to the company's own financial statement, last year only 30 percent of the oil giant's $36 billion in profits went to exploration and increasing capacity. The company says that's a record level of investment in new supplies. Maybe so, but it's less than it spent rewarding shareholders. 15 percent of profits went directly to shareholders in the form of cash dividends, and the biggest chunk, 40 percent, was used to repurchase Exxon's own stock."

Stark concluded: "ExxonMobil told us today that whether the company is making record profits or even losing money, it invests consistently in finding new sources of oil. But with supplies so tight and profits so high, there are lots of people who would like to see them invest even more."

NBC Nightly News, with anchor Brian Williams in New Orleans, led with the continuing Katrina clean-up and President Bush's visit to the Crescent City. After a note about Bush stopping by a Biloxi gas station, Williams set up Lisa Myers:

"Gas prices were the main topic on Capitol Hill again today as well, and Senate Republicans there on the Hill unveiled their plan to try to ease the pain over gas prices. Among the proposals, they have outlined a $100 per taxpayer rebate linked to opening Alaska's Arctic National Wildlife Refuge for drilling, looser permitting rules for new refineries, and a rollback of recent tax breaks for the oil industry. All of this comes as oil companies are reporting more massive earnings. ExxonMobil just today reported $8.4 billion for the first quarter, the fifth highest quarterly earnings number on record. Those numbers are infuriating a lot of Americans. NBC News senior investigative correspondent Lisa Myers has more." 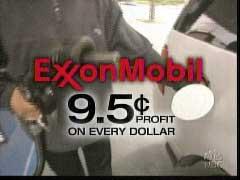 Lisa Myers, over the supposedly embarrassing number on screen: "For outraged consumers, the staggering profit numbers boil down to this: Exxon earned 9.5 cents on every dollar of gasoline and oil sold, cashing in at every stage of the process."

John Kilduff, oil trader: "Big money for ExxonMobil is being made by taking crude oil out of the ground and refining it into gasoline, and selling it at the street corner."

Myers: "Though consumers clearly feel gouged, are oil industry profits out of line with other industries? An oil industry ad dubbed 'Straight Talk' claims they are not, and highlights a multi-year average that is lower than current profits. In fact, the oil industry's profit margin last year was 8.5 percent, higher than the average for all industries, but less than half the profit of banks. Consumer groups argue that oil companies are profiting unfairly from their own failure to invest in refineries, which is now driving up gas prices."

Mark Cooper, Ph.D., Consumer Federation of America: "People's budgets are being clobbered by companies who have failed to expand capacity, failed to compete, and then stockholders get rewarded, executives get rewarded, and the people suffer." 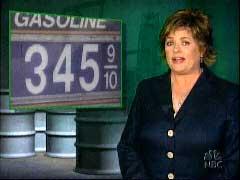 John Felmy, American Petroleum Institute: "One has to compare any executive's compensation with the performance of the companies that they manage."

Myers concluded: "Oil industry officials also argue that some profits are passed on to average Americans who invest in the companies, but critics say in most cases, those dividends won't begin to offset the high cost of gas, and the outrage. Lisa Myers, NBC News, Washington."