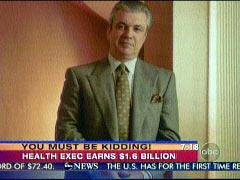 On the heels of MSM outrage at the retirement package granted to Exxon/Mobil CEO Lee Raymond [see Brent Baker's report here], Good Morning America was back at the class-warfare ramparts this morning with a new target in its sights, Dr. William McGuire, head of UnitedHealth Group. As the result of share prices that have increased over 7,000 percent, stock options granted McGuire are currently worth in excess of $1 billion.

ABC reporter Dan Harris narrated the segment, and GMA set the tone with its title - "You Must be Kidding!" But there was no joking about the class-warfare on display in the opening lines: "The head of one of the nation's largest healthcare companies is sitting on more than a billion dollars in stock openings while Americans go uninsured."

GMA never explained how the one fact relates to the other. If the money paid to McGuire went instead to shareholders in the form of dividends or remained in the company and drove share prices up, would that somehow have made a significant dent in the ranks of the uninsured?

GMA sustained its drumbeat of envy and jealousy: "While patients, doctors and hospitals have been feeling the pain of rising healthcare costs, [McGuire] has been accumulating one of the richest batches of stock options ever."

A clip was shown of McGuire being asked "$1.6 billion. Do you intend to keep all that money?"

McGuire: "I've been very fortunate. But that number fluctuates with the price of the stock." It was noted that he has donated tens of millions to various organizations.

GMA then screened a pharmicist, Joel Albers, from McGuire's neck of the woods, and informed us that "this man goes to state fairs dressed as Dr. McGuire accusing him of corporate greed."

Albers: "As health practitioners, we have a moral obligation to speak out."

When McGuire was quoted as saying "I've never made it a practice of looking for money," GMA responded sneeringly: "the man who claims not to be looking for money cared very much about perks such as the nearly $140,000 the company forked over for his personal travel plus nearly $70,000 for personal financial planning."

ABC reported that shareholders have brought a lawsuit over the stock options and that "yesterday, the Attorney General of Minnesota joined" the suit. Don't suppose the good AG sees any political hay to be made, do you? It was mentioned that McGuire has asked for his perks to be pulled and for no more stock options to be granted to him and fellow company execs.

Back in the studio, when Harris concluded "McGuire is saying, and I quote here 'we sleep with good conscience'," host Robin Roberts, echoing the theme of the day, shot back "You must be kidding!" She then tossed it to Charlie Gibson, who observed "he sleeps with a lot of money, too," as Diane Sawyer piled on "maybe on nice sheets." Gibson echoed the "sheets" line.

Hey, who can blame Sawyer and Gibson for their jealousy? According to this article, Diane has to make ends meet on a mere $13 million a year, while Gibson, scraping by at a paltry $7 million, could be one missed paycheck away from sleeping on a subway grate.

Finkelstein lives in the liberal haven of Ithaca, NY, where he hosts the award-winning public-access show 'Right Angle'. Contact him at: mark@gunhill.net