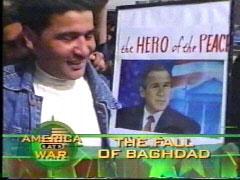 While most in the media insist on bombarding audiences with constant pessimism when it comes to Iraq and the war on terror (today’s New York Times headline, for example, asserts “Arab Democracy, a U.S. Goal, Falters”), it is worth recalling that three years ago this morning, newspapers such as the New York Times were trumpeting good news from Iraq — the “joyous” and “cheering, often tearful welcome” that the people of Baghdad had for American forces when they were finally liberated from Saddam Hussein’s tyranny.

The Times’ John Burns — who was himself, a target of Saddam’s secret police during the final days of the dictatorship — was eyewitness to the celebrations. His story appeared on the front page of the April 10, 2003 Times. While including the fact that some Iraqis were both anti-Saddam and anti-American, and noting the doubts many Iraqis had about the future, Burns makes it pretty clear that, to use Vice President Cheney’s phrase, Americans were mostly “greeted as liberators.” Excerpts:

Saddam Hussein's rule collapsed in a matter of hours today across much of this capital city as ordinary Iraqis took to the streets in their thousands to topple Mr. Hussein's statues, loot government ministries and interrogation centers and to give a cheering, often tearful welcome to advancing American troops.

After three weeks battling their way north from Kuwait against Mr. Hussein's hard-core loyalists, Army and Marine Corps units moving into the districts of eastern Baghdad where many of the city's five million people live finally met the kind of adulation from ordinary Iraqis that American advocates of a war to topple Mr. Hussein had predicted.

Amid the celebration, many of Mr. Hussein's troops and officials simply abandoned their posts and ran away.

Much of Baghdad became, in a moment, a showcase of unbridled enthusiasm for America, as much as it metamorphosed into a crucible of unbridled hatred for Mr. Hussein and his 24-year rule.

American troops, but almost as much any Westerner caught up in the tide of people rushing into the streets, were met with scenes that summoned comparisons to the freeing of Eastern Europe 14 years ago.

There was no word on the fate of Mr. Hussein or his sons, Uday and Qusay, targeted by American bombs in a western residential area on Monday. But his whereabouts -- even his very existence -- seemed irrelevant as American Marines used an M88 tank recovery vehicle to topple a large statue of Mr. Hussein in the central Firdos Square.

Crowds surged forward to stomp on the downed statue, whose head had briefly been covered in an American flag, and several men dragged its severed head through the streets.

A burly 39-year-old man named Qifa, assigned by Mr. Hussein's Information Ministry to keep watch on an American reporter, paused at midmorning, outside the inferno that had been the headquarters of Iraq's National Olympic Committee, to ask the reporter to grip his hand. The building, used to torture and kill opponents of Mr. Hussein, had been one of the most widely feared places in Iraq.

It was real, at last. When the city awoke to find that the American capture on Monday of the government quarter in west Baghdad had been followed overnight by a deep American thrust into the city's eastern half, the fear ingrained in most Iraqis evaporated.

Iraqis on foot, on motor scooters, in cars and minivans and trucks, alone and in groups, children and adults and elderly, headed for any point on the map where American troops had taken up positions — at expressway junctions, outside the United Nations headquarters, at two hotels on the Tigris River where Western journalists had been sequestered by Mr. Hussein's government -- and erupted with enthusiasm.

Shouts to the American soldiers of "Thank you, mister, thank you," in English, of "Welcome, my friend, welcome," of "Good, good, good," and "Yes, yes, mister," mingled with cries of "Good, George Bush!" and "Down Saddam!"

But reporters who crossed one of the deserted midtown bridges across the Tigris into the western area of the city discovered quickly that Mr. Hussein's hold has not been wholly broken....

American commanders in the city barely paused to soak up the celebrations before warning tonight that much hard work remained to be done in extending the pockets of American control in east and west Baghdad into areas that remained no-man's lands, or worse, pockets of active resistance.

Those pockets were clearly still dangerous today, but they were also isolated. Many people seemed joyous. A middle-aged man pushed through a crowd attempting to topple a statue of Mr. Hussein outside the oil ministry with a bouquet of paper flowers, and passed among American troops distributing them one at a time, each with a kiss on the cheek.

A woman with two small children perched in the open roof of a car maneuvering to get close to a Marine Corps unit assisting in toppling a Hussein statue outside the Palestine and Sheraton hotels, the quarters for foreign journalists, wept as she shouted, "Thank you, mister, thank you very much."