The Ingraham Smackdown: How The Networks Turned Tinny and Defensive 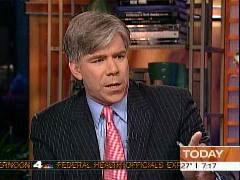 National Review Online was kind enough today to publish a little piece I composed, titled "Role Reversal: David Gregory finds out what it's like to be Scott McClellan." It briefly chronicles how Laura Ingraham started a wave of defensive media coverage with her fiery soundbites in favor of the liberal media getting off the balcony if-it-bleeds-it-leads beat. Here are some additional notes I took as I was putting this together...

Reporters were shaking their heads at the thought that a few speeches by President Bush could undo their handiwork in lowering Americans’ approval of the war and its commander.

One particularly absurd sentence came out of ABC White House reporter Jessica Yellin: "Even the President’s aides acknowledge this speech on its own won’t reverse falling American support for a war that increasingly defines the Bush presidency." No one on Earth expects one daytime speech in Cleveland to completely reverse public opinion. But it was almost a taunting sentence: the White House must admit that they can’t turn around public opinion if the TV news crews oppose them tooth and nail.

On CNN’s "Anderson Cooper 360," Cooper invited on Hugh Hewitt to debate CNN’s Nic Robertson, Time’s Michael Ware, and Cooper. Like Ingraham, Hewitt made the point that explosions are not the only story in Iraq, and Iraq is certainly better off than it was under Saddam. Time’s reporter responded in a typical Howard-Deanesque tone, that a lot of Iraqis say "what, this is democracy? The joke is, you call this liberation?" He also said the winners of the war are al-Qaeda and Zarqawi, who’s now "the superstar of international jihad." This wasn’t defensive, it was offensive, in several different meanings of the word.

On Wednesday morning, several networks were still on the defensive. Reporters love use a "blame the messenger" defense. They love to suggest something undemocratic, that the president is leaning on the free press for reporting the hard facts. "President Bush comes out swinging about coverage of the violence in Iraq," warned ABC’s Charles Gibson. "Part of the administration's new PR offensive on Iraq seems to be blaming the media, at least in part, for Americans' doubts about the war," claimed Jessica Yellin. "It's not the first time the White House has gone after the media when the chips were down."

Yellin: "At Tuesday's press conference the President was firing back saying that Americans are losing confidence in Iraq partly because the media covers only the violence and that's what the insurgents want."

Bush: "They're capable of blowing up innocent life so it ends up on your TV show. (ABC edit) Please don't take that as criticism, but it's also a realistic assessment of the enemy's capability to affect the debate and they know that."

After Gibson and Yellin used their president-wars-on-the-press lingo, Yellin concluded the story with a bit of rebuttal: "The White House flatly disputes our characterization of the President's comments saying there is no effort to blame the media. They say the President is simply pointing out that the violence gets more air time than the good news, which is why the President is making such an effort to highlight what's going right in Iraq."