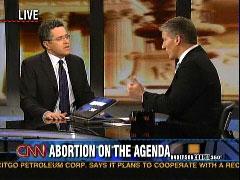 Following up on Brent Baker’s earlier posting on this topic, the networks are not the only ones reluctant to apply the term "partial-birth abortion" in reporting on the Supreme Court decision to review whether a federal law banning the procedure is constitutional. Shortly before 10:30pm on the February 21 edition of CNN's Anderson Cooper 360, substitute host John King discussed the issue with legal analyst Jeffrey Toobin. The term "partial birth" was referred to only twice in the segment by King, who made sure to note that it was a term used by "critics" of the procedure.

Toobin, for his part, fretted that the partial-birth abortion ban, along with parental notification laws, was part of a strategy from "pro-life forces" to "chip away" at the, apparently set in stone "right" to abortion. To Toobin’s credit, he did mention the popular support for these "later-term abortion restrictions" by the American public.

A full transcript of the exchange is behind the cut.

John King: "It is something abortion-rights supporters have feared and abortion foes have longed for. Today, the new Supreme Court, reshaped by President Bush, announced it will take on the abortion issue. It plans to weigh in on a case concerning a federal ban on a certain type of abortion dubbed by critics as partial-birth abortion. That ban was signed into law more than two years ago, but it was blocked in the courts before it could take effect. Joining me now to discuss the Supreme Court’s involvement, once again, our senior legal analyst, Jeffrey Toobin. This is about late-term, or what the critics call partial-birth abortions, but it could be about a lot more than that."

Jeffrey Toobin: "Absolutely. And, and you need a little history to understand why this is such a significant decision to take this case by the Supreme Court. In 2000, six years ago, the state of Nebraska had passed a very similar law regulating these abortions that are after the first trimester, how late in, in, how late-term is a matter of some controversy, but they are later-term abortions. The Supreme Court, by a vote of 5 to 4, with Sandra Day O’Connor in the majority, said that was an unconstitutional violation of women’s rights. You can’t deprive women of the choice to have that medical procedure. 2003, the United States Congress passes a bill very similar to the Nebraska law. President Bush signs it. The courts have said, just like the 2000 decision, unconstitutional. Now the Supreme Court essentially is reevaluating its own decision from 2000, except with a different cast of characters on the court."

King: "And, and one of the different cast of characters is Justice Samuel Alito, who, while on the federal appeals court bench, seemed to be more open-minded than Sandra Day O’Connor to letting there be more restrictions on abortion."

Toobin: "And, certainly, in his now famous memorandum that he wrote when he was in the Justice Department in 1985, said he didn’t believe that the Constitution protected any kind of right of, of a woman to have an abortion. So, the O’Connor-out, Alito-in switch is absolutely pivotal in this case. And it, it suggests, doesn’t guarantee, that this decision will approve the congressional law, which, as the graphics show, doesn’t, doesn’t affect that many abortions, we don’t know precisely how many, but is a, certainly a signal of where the Court may be going."

Toobin: "Correct. And, again, we don’t know. So far, Judge–Chief Justice Roberts doesn’t have much of an extensive record so far. But he has been pretty conservative, when there’s been the opportunity. It–the, the Rehnquist-for-Roberts switch doesn’t suggest that much of a, a change in the Court. But we don’t know. Neither one of them had spoken out that directly in recent years about abortion."

King: "Is this a test of Roe v. Wade, or is it more a test of more restrictions, whether it’s parental consent, parental notification, banning abortions earlier in the term?"

Toobin: "It’s really inconceivable to me that the Supreme Court could use this case to overturn Roe v. Wade. This case doesn’t really address the issue of the vast, vast majority of abortions in this country which is in the first trimester, and that the Court has said very clearly in, in the Roe case and then more importantly in the Casey case in 1992, that that’s the core right. This is part of a strategy that the pro-life forces have followed for many years, which is that chip away at the right, parental consent laws, later-term abortion restrictions. That’s been effective and the Court has–it is also politically much more popular than regulating early-term abortions. These, these laws, like later-term abortion restrictions, are pretty popular with the public. The, the–that always has an effect on the Supreme Court."

King: "Fascinating case on the docket next year. The way the Court works, likely to be a political issue beyond a legal issue come 2008. Jeffrey Toobin–"

Toobin: "You can bet on that."

King: "You can bet on that. Thank you very much, Jeffrey Toobin."