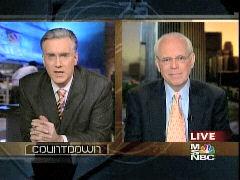 While introducing an interview with former Nixon White House Counsel John Dean on his Countdown show Friday night, MSNBC's Keith Olbermann implied that Plamegate is worse than past White House scandals because, in contrast to scandals from the Nixon, Reagan, and Harding administrations, a sitting White House staff member has been indicted. Referring to Bush supporters who were offended by the title of Dean's book, Worse than Watergate, Olbermann quipped that because of Libby's indictment, "the protests about John Dean's title might instead be coming from the fans of Presidents Nixon, Reagan and Harding."

Also, referring to the possibility that the indictment could bolster the belief by some that the White House lied about the rationale for the Iraq invasion, Olbermann wondered: "Is the damage here, perhaps, that as the nation has solely gotten around to questioning the justification for the war in Iraq, what we've all been asking has been: Did the government and people in it make false statements? Are they liars? And now there is a charge of false statements and basically lying against a man who was prominent in that government?" A complete transcript of Olbermann's interview with Dean from the Friday October 28 Countdown show follows:

Keith Olbermann: "There were, in many quarters, guffaws and snorts when John Dean's book, Worse than Watergate, was published on April 6, 2004, analogizing the presidencies of George W. Bush and Richard Nixon. It boggled the mind and infuriated the current President's supporters. Our number one story in the Countdown, in point of fact, none of Richard Nixon's White House staff was ever indicted while still on his White House staff. The same could be said for the tainted administrations of Ronald Reagan and Warren Harding. Tonight, with the indictment having gotten to Scooter Libby's office before Scooter Libby vacated that office, the protests about John Dean's title might instead be coming from the fans of Presidents Nixon, Reagan and Harding. John Dean joins us again tonight from Los Angeles. Good evening, John."

Olbermann: "In your book a year and a half ago, you wrote of the outing of Valerie Plame that it was 'every bit as stupid an action as the Watergate break-in' and that it was 'the beginning of the end of a presidency except that the Bush-Cheney attack was worse because it was immediately life-threatening and damaging to national security.' What did we learn, if anything, today that clarifies either the stupidity or the damaging?"

Dean: "Well, I think what we learned today is the, 'stupid' isn't the correct, right word. It's sort of inane and really unconscionable for a lawyer to go before a grand jury or an FBI agent and try to spin the story that Scooter Libby tried to spin. It clearly was a very dangerous game he was playing, and he lost it."

Olbermann: "The original act, though, getting involved in some way in disseminating this information and playing this game of telephone with reporters, if that was, as you described it a year and a half ago, 'stupid,' why did they do that part of it? Was the motive in doing it simply revenge? I mean, the White House you knew believed fervently in revenge? Was that the motive here for all of this?"

Dean: "Well, I'm not sure we know the motive other than what is quite conspicuous from the indictment itself, is that there was a clear effort to deal with a problem critic, Joe Wilson. And this was a part of the solution. As to why Scooter Libby lied about it, the motive for that, it appears from the indictment that he felt jeopardy because he looks like on July, excuse me, on June 12 of 2003, the Vice President told him, in essence, this woman is a covert agent, so he knew he had some problems after he had done the act he had done."

Olbermann: "So the release of the information about Valerie Plame or the trading off in this information might have been done in lack of knowledge of her covert status, and then what we have here is your basic coverup for fear that it would be assumed that they had busted out the identity of a covert agent?"

Dean: "If you look at the sequence, he learns from the Vice President on June 12 of 2003, it's not until July, this is a part of the phase where they're in the attack. He may not have been aware of the Identities Protection Act until after it all had exploded. And then it would be very logical to give a false, you know, spin a false tale. The other thing, Keith, that's very real in this case is he may well be protecting the Vice President."

Olbermann: "After the denials that anybody, including the Vice President, in the White House was involved and now Libby is indicted, the Vice President is identified as his source in the indictment document, the CIA is identified as the President's source, the administration has been adamant back from just shortly after the first of those blanket denials that it cannot and will not comment at all on an ongoing investigation. That is, in some respects, an ultimate super stonewall. You have seen stonewalls from both sides. Can this one hold?"

Dean: "Well, when you have a prosecutor who obviously can't under law under the rules of federal criminal procedure talk, then you have a White House that won't comment on an ongoing investigation, I can tell you this is the ultimate stonewall. In fact, Keith, believe it or not, it was considered as one of the ways and the remedies to peel the cancer away from Richard Nixon, which was to take it into the grand jury. And this would have worked but for the Congress deciding to investigate. But there is serious consideration of doing it this way because so little comes out of a grand jury."

Olbermann: "There are lots of, speaking of things that aren't coming out, lots of shadowy figures in Mr. Fitzgerald's document today. Official A, I think it might be a stretch to call him the Deep Throat of this, but it's nice to just sort of throw that name in there while we're talking together, but there's only one Vice President. And he is mentioned by title, if not by name. Is that the end of the damage this will do to him? Or, as you suggested, could the whole thing be boiling down here to Mr. Libby at some point having decided to protect him, and could this reference in this indictment be a kind of worm hole to some future investigation of the Vice President?"

Dean: "Well, clearly Scooter Libby is the firewall for Dick Cheney at this point. I don't think they can go very far on any further investigation unless Mr. Libby were to change his mind and start talking about only things that he would know and is privy to in relationship to the Vice President. I have no indication that he would do so. It may well be this is an effort by the special council to put some pressure on Mr. Libby to see how much heat that firewall will take because he's got it on him right now."

Olbermann: "For all there is in that document today as the administration's defenders have repeated with some glee all day, there's no mention of the leak itself nor of the loss of an intelligence asset in Valerie Plame, this is just about perjury, obstruction of justice, making false statements to the FBI. But have the defenders got it backwards in there? Is the damage here, perhaps, that as the nation has solely gotten around to questioning the justification for the war in Iraq, what we've all been asking has been: Did the government and people in it make false statements? Are they liars? And now there is a charge of false statements and basically lying against a man who was prominent in that government?"

Dean: "Well, there's no question that they have made that a very clear case and a very powerful case in the indictment against Scooter Libby. Indirectly, they have put the lie to Dick Cheney from some of his public statements. The real thing, though, Keith, is I don't necessarily agree with those who would indicate there's no indication of damage done to national security in this indictment. I think, to the contrary, it's not unlike dealing with Al Capone with a tax case, you deal with a mob situation. It's not unlike many, all of those people who got caught up in Watergate for the conspiracy and not the actual break-in. They were dealing with the tip of the iceberg. And that's the way prosecutions actually resolve a lot of issues. And I think Fitzgerald made that point in his press conference today."

Olbermann: "And how ironic you bring up Capone, given that Patrick Fitzgerald went after the mob in New York. John Dean, author of Worse than Watergate: The Secret Presidency of George W. Bush. As always, John, great thanks for joining us tonight."