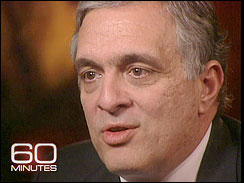 However, one of Tenet’s former employees, Michael Scheuer, published an op-ed (h/t Captain Ed) in the Washington Post Sunday cautioning that “the former director of central intelligence is out to absolve himself of the failings of 9/11 and Iraq.”

As a result, in Scheuer's view, “we shouldn't buy his attempts to let himself off the hook.”

The former head of the CIA’s bin Laden unit, who I interviewed last September, wasn’t shy with his criticisms of his former boss, who apparently has quite a history of blaming others for his own failures (emphasis added throughout):

But [Tenet] will also be recalled for fudging the central role he played in the decline of America's clandestine service -- the brave field officers who run covert missions that make us all safer. The decline began in the late 1980s, when the impending end of the Cold War meant smaller budgets and fewer hires, and it continued through Sept. 11, 2001. When Tenet and his bungling operations chief, James Pavitt, described this slow-motion disaster in testimony after the terrorist attacks, they tried to blame the clandestine service's weaknesses on congressional cuts. But Tenet had helped preside over every step of the service's decline during three consecutive administrations -- Bush, Clinton, Bush -- in a series of key intelligence jobs for the Senate, the National Security Council and the CIA.

As you might imagine, none of this was addressed on this evening’s “60 Minutes.”

Like self-serving earlier leaks seemingly from Tenet's circle to such reporters as Ron Suskind and Bob Woodward, "At the Center of the Storm" is similarly disingenuous about Tenet's record on al-Qaeda. In "State of Denial," Woodward paints a heroic portrait of the CIA chief warning national security adviser Condoleezza Rice of pending al-Qaeda strikes during the summer of 2001, only to have his warnings ignored. Tenet was indeed worried during the so-called summer of threat, but one wonders why he did not summon the political courage earlier to accuse Rice of negligence, most notably during his testimony under oath before the 9/11 commission.

"I was talking to the national security adviser and the president and the vice president every day," Tenet told the commission during a nationally televised hearing on March 24, 2004. "I certainly didn't get a sense that anybody was not paying attention to what I was doing and what I was briefing and what my concerns were and what we were trying to do." Now a "frustrated" Tenet writes that he held an urgent meeting with Rice on July 10, 2001, to try to get "the full attention of the administration" and "finally get us on track." He can't have it both ways.

However, that’s not what draws Scheuer’s greatest ire concerning the former CIA director:

But what troubles me most is Tenet's handling of the opportunities that CIA officers gave the Clinton administration to capture or kill bin Laden between May 1998 and May 1999. Each time we had intelligence about bin Laden's whereabouts, Tenet was briefed by senior CIA officers at Langley and by operatives in the field. He would nod and assure his anxious subordinates that he would stress to Clinton and his national security team that the chances of capturing bin Laden were solid and that the intelligence was not going to get better. Later, he would insist that he had kept up his end of the bargain, but that the NSC had decided not to strike.

Since 2001, however, several key Clinton counterterrorism insiders (including NSC staffers Richard A. Clarke, Daniel Benjamin and Steven Simon) have reported that Tenet consistently denigrated the targeting data on bin Laden, causing the president and his team to lose confidence in the hard-won intelligence. "We could never get over the critical hurdle of being able to corroborate Bin Ladin's whereabouts," Tenet now writes. That of course is untrue, but it spared him from ever having to explain the awkward fallout if an attempt to get bin Laden failed. None of this excuses Clinton's disinterest in protecting Americans, but it does show Tenet's easy willingness to play for patsies the CIA officers who risked their lives to garner intelligence and then to undercut their work to avoid censure if an attack went wrong.

As you might imagine, Pelley didn't question Tenet about any of this either.

As for Scheuer’s take on this “slam dunk” issue:

Tenet now paints himself as a scapegoat for an administration in which there never was "a serious consideration of the implications of a U.S. invasion," insisting that he warned Bush, Cheney and their Cabinet about the risks of occupying Iraq. Well, fine; the CIA repeatedly warned Tenet of the inevitable disaster an Iraq war would cause -- spreading bin Ladenism, spurring a bloody Sunni-Shiite war and lethally destabilizing the region.

But as with Rice and the warnings in the summer of 2001: Now he tells us.

Scheuer feels that if Tenet believed going to war was wrong, and he couldn't convince the Administration of this, he should have resigned, and blown the whistle rather than making this case four-plus-years later:

At day's end, his exercise in finger-pointing is designed to disguise the central, tragic fact of his book. Tenet in effect is saying that he knew all too well why the United States should not invade Iraq, that he told his political masters and that he was ignored. But above all, he's saying that he lacked the moral courage to resign and speak out publicly to try to stop our country from striding into what he knew would be an abyss.

After all, the compelling briefing that [then Secretary of State Colin] Powell, with Tenet sitting just behind his shoulder, gave the U.N. Security Council in February 2003 could never have been delivered if Tenet had blown the whistle.

Interesting point that the media, who have suddenly jumped on Tenet’s recent comments as another indictment of the Bush administration, are conveniently ignoring, wouldn’t you agree?

As an aside, lest you believe that Scheuer is just an Administration cheerleader, he had few positive comments about any members of the current White House in this op-ed, and made it quite clear that he believes going into Iraq in 2003 was a terrible mistake.

Finally, for those interested, here is the section from Sunday’s “60 Minutes” concerning “slam dunk”:

Scott Pelley: What Tenet didn’t know was that the next bloodletting would be his. It came in another White House leak, this time to reporter Bob Woodward. An unnamed source described to Woodward a pre-war meeting in the Oval Office. The CIA was showing the president how to present to the public the case for weapons of mass destruction. Woodward wrote “Tenet rose up, threw his arms in the air. 'It’s a slam dunk case!'"

"I never got off the couch, I never jumped up, there was no pantomime. I didn’t do my Michael Jordan, Air Jordan routine for the president that morning," Tenet tells Pelley.

"What did you mean by slam dunk?" Pelley asks.

"I guess I meant that we could do better," Tenet says.

"We can put a better case together for a public case, that’s what I meant. That’s what this was about," Tenet explains.

"I'll never believe that what happened that day, informed the president's view or belief of the legitimacy or the timing of this war. Never," Tenet insists