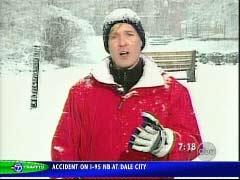 During Thursday’s "Good Morning America," ABC ran a promo previewing a day-long push for liberal environmental action. The event, which takes place on April 20, will encompass ‘Good Morning America,’ ‘Nightline’ and ‘World News.’ The ad’s narrator promises a "call to action," and notes that the proceedings be hosted by GMA’s Diane Sawyer and will culminate in a hour long special at 10pm:

ABC ad: "Mother nature is sending us a message and we hear it. In eight days, an extraordinary global event. Travel live to all seven continents with ABC News and Diane Sawyer, revealing first hand the real changes in our planet. This is a call to action."

Considering that "Good Morning America’s" weatherman, Sam Champion, is an outspoken environmental activist, in early April he promoted "green weddings," one can expect he will be a big part of this activist push. (Champion can be seen above. On April 12, the same day that GMA promoted this event, he reported on the April snowstorms that have hit parts of the East Coast.)