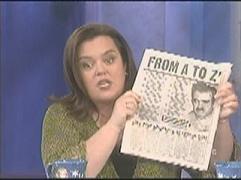 ABC’s Rosie O’Donnell has said some pretty disgraceful things on “The View” since her arrival. However, this might be the worst.

On Thursday’s installment, O’Donnell actually said that the only reason al Qaeda terrorist Khalid Sheikh Mohammed confessed to any of his actions is because he is being held and tortured by the United States government.

As Debbie Schlussel reported on this issue (emphasis mine throughout):

This is the last straw. If Barbara Walters doesn't fire Rosie O'Donnell from "The View" over comments O'Donnell made on today's episode, then she never will.

Today, O'Donnell said she feels bad for Khalid Sheikh Mohammed (KSM). She doesn't believe he's responsible for anything in 9/11 or any of the 26 plots which he volunteered to American authorities. Among the worst of her comments, O'Donnell derided airhead pseudo-conservative Elisabeth Hasselbeck (who is ZERO match for O'Donnell on the intellectual scale) for calling KSM a "terrorist," saying, "So, calling him a terrorist robs him of all of his humanity?"

Then, there are O'Donnell's comments about KSM admitting to planning the 9/11 attacks. She yelled, "So we finally got the guy. He just so happened to admit to all of these things. And it's not Bin Laden? It's this guy?" She then said that she doesn't believe he's responsible for any of it, and that we Americans tortured him and got him to admit to it. She shrieked on and on that we Americans torture these poor people.

Shocking stuff to say the least.

UPDATE: For those interested, here is an AP report discussing Mohammed's confession. Furthermore, the Smoking Gun has a copy of the actual signed confession here (h/t Drudge for both).