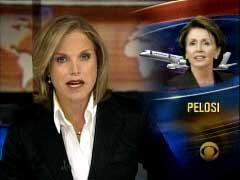 On Wednesday evening, CBS became the first of the broadcast networks to cover the controversy over House Speaker Nancy Pelosi's efforts to acquire access to a larger jet than what her predecessor used. CBS Evening News anchor Katie Couric relayed that Pelosi's request for a "big travel upgrade" was coming at a time when "they're cracking down on congressional perks." After pointing out that Pelosi "finds herself on the defensive" as military officials are "grumbling," correspondent Sharyl Attkisson gave attention to House Republican Whip Roy Blunt's concern that the extra seats on such a large aircraft might be used for fund-raising purposes. According to a Nexis search, the only mentions of the controversy on the cable news networks have come several times this week on CNN's Lou Dobbs Tonight and once on MSNBC's Tucker. (Transcript follows)

Below is a complete transcript of the story from the February 7 CBS Evening News:

Katie Couric: "Now, to a story that has Washington buzzing tonight. At a time when they're cracking down on congressional perks, the new Speaker of the House is apparently asking for a big travel upgrade. Sharyl Attkisson reports from Capitol Hill." 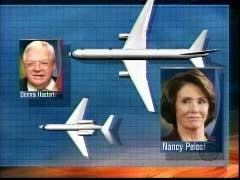 Sharyl Attkisson: "Ever since 9/11, a small military jet like this has been made available to transport the Speaker of the House for security reasons. The Speaker is second in the line of succession to the presidency. Back then, it was Republican Dennis Hastert. Now it's Democrat Nancy Pelosi. But she may be getting a little more leg room. Speaker Pelosi is reportedly asking for a much bigger jet, a government version of the Boeing 757 that can make the trip between Washington and her San Francisco home without stopping to refuel. The Speaker's critics have dubbed it Pelosi One. Military officials are said to be grumbling about it, and the Speaker finds herself on the defensive. Today she insisted size doesn't really matter."

Pelosi clip #2: "We want an aircraft that can reach California."

Attkisson: "But an aircraft like that can comfortably seat 50. And Republican leader Roy Blunt is among those questioning how all those extra seats might get filled."

Attkisson: "Pelosi's office told us she'll follow all the appropriate guidelines. Problem is there aren't any yet. Because of the flack, the Defense Department is now said to be quickly writing rules for the Speaker's plane, everything from size to who can go along for the ride."