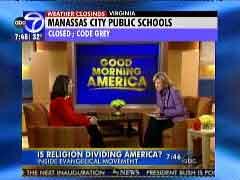 Documentary filmmaker Alexandra Pelosi, daughter of House Speaker Nancy Pelosi, has directed a new film that takes a look at the evangelical movement in America. Appearing on Monday’s "Good Morning America," she discussed the now disgraced Reverend Ted Haggard who served as a guide for her film crew’s tour of Red State America. Pelosi told host Diane Sawyer that most people think of evangelical Christians as "holy roller Jesus freaks," and seemed surprised that Haggard didn’t fall into that category. During the discussion, both the ABC anchor and the filmmaker appeared to be trying to treat evangelicals with respect. However, each succumbed to the occasional condescending sounding slip-up. Sawyer asked Pelosi whether the trip to conservative parts of America left her feeling as though "you had to get a visa to a foreign country." And later, Pelosi described the journey "as sort of a sociological field trip." It was the "Jesus freak" comment, however, that appeared too much for even Diane Sawyer:

Alexandra Pelosi: [On the Ted Haggard scandal] "I was heartbroken. Because pastor Ted was my tour guide. And he was so good to me. He took me under his wing and said, ‘Let me explain the red states to you’. And it was hard for me to understand, most people think of evangelicals as being these holy roller Jesus freaks, and Ted wasn't like that. And so, it was interesting for me to understand and say, these are good people. He was reasonable. He was reasonable. He was a normal, every day man. And so, it was hard to stomach, what had happened."

Sawyer: "Yes, and I'm going to have everybody write you who wants to write about ‘holy roller Jesus freaks,’ okay?"

Earlier in the segment, which aired at 7:42am on January 22, Pelosi discussed her "sociological field trip."

Diane Sawyer: And now, a look inside the great divide. And that is the religious divide, a lot of people perceive in this country. It is a new film from HBO called ‘Friends of God.’ It is the work of filmmaker Alexandra Pelosi, yes, daughter of House Speaker Nancy Pelosi, a blue stater, who spent the better part of a year among her red state countrymen. And she joins us now with some of the things she learned. And it’s nice to have you here."

Alexandra Pelosi: "Thank you for having me."

Sawyer: "You know, it's got to strike a lot of people who live in middle America, church going people, as very quaint that you have to come visit them to learn about them. Where did this begin? Did you feel you had to get a visa to a foreign country?"

Pelosi: [Laughs] "Well, I had made two political documentaries and I was trying to get away from politics. And growing up, they always said the two things you're not supposed to talk about in polite conversation is politics and religion. So, since I’d done politics, I thought it was a chance to go and explore religion."

Sawyer: "And you found, I gather, that when you encountered all those people, even those who recognized your name, they were less weary of your politics, than they wanted to know about your religion."

Pelosi: "Yeah, well, when you’re in the Bible Belt, they refer to Home Box Office as Hell’s Box Office, so it was hard to walk in the front door and say, ‘Hi. I’m from New York and I work for HBO and I’m here to talk to you. I always felt like I was sort of on a sociological field trip. Because they were studying me and I was studying them and we were trying to bridge the gap."

Despite her clumsy language, Pelosi actually stated she now understands the importance of religion and even suggested that if she had to make a choice in the culture wars, the daughter of liberal Speaker of the House would go with the conservatives:

Sawyer: "Well, one of the things that happened was your tour guide was the former president of the National Association of Evangelicals. And that’s Ted Haggard, as we know, who got trapped in a alleged scandal involving drugs and a male prostitute. But when you were there, you engaged with him in some amazing conversations. Here’s our first clip."

[Clip of ‘Friends of God]

Sawyer: "When you heard about the scandal?"

Pelosi: "I was heartbroken. Because pastor Ted was my tour guide. And he was so good to me. He took me under his wing and said, ‘Let me explain the red states to you’. And it was hard for me to understand, most people think of evangelicals as being these holy roller Jesus freaks, and Ted wasn't like that. And so, it was interesting for me to understand and say, these are good people. He was reasonable. He was reasonable. He was a normal, every day man. And so, it was hard to stomach, what had happened."

Sawyer: "Yes, and I'm going to have everybody write you, who wants to write about ‘holy roller Jesus freaks,’ okay? On that phrase. Jerry Fallwell. Another of the things you encountered. Giant churches, as we know, some of them stadium sized churches. And he sat down and talked to you about the organization, and how ferocious, how ferociously disciplined it is, and you said you came away with a new found respect."

Jerry Fallwell clip: "Evangelicals are the largest majority block in America. It's not a majority, but I don't think you can win without them. I think if you unified, you'll lose if they go against you. John Kerry learned that. Al Gore learned that, and Hillary will learn it in 2008."

Sawyer: "Came away with respect?"

Pelosi: "I came away with so much respect for the evangelical movement because they are so organized. They go to church on Sunday, and then after the service, they meet to -- Colorado marriage amendment, the Florida marriage amendment. They say, this is what we care about and this is what we are going to do. They were so mobilized and so organized, and that is something everybody can learn something from."

Sawyer: "You even said, ‘I believe in the culture war and, you know what, if have to take a side I'll take their side. Because if you give me the choice of Paris Hilton or Jesus, I'll take Jesus."

Pelosi: "Well, there's a lot of secular television that provides bad role models for our teenagers. And the church offers a strong foundation of values, which I think is really important for young people."

Sawyer: "So, this is a shift for you. You have a two week old son and you're going to make sure he goes to church?"

Pelosi: "Well, yeah. Yes. It’s important for me now. On a personal note, something I took away from this: It is important to expose your children to religion, any religion, whatever is important to you. Because otherwise they'll be called unchurched, and those are the ones who may later in life fall into more extreme religions."

Sawyer: "So you came away a changed person in some ways."

Sawyer: "Nothing like a road trip. And actually meeting the people that you're talking about all the time. Alexandra Pelosi. Again it is called ‘Friends of God.’ It airs on HBO. And you've done it again."

Okay, so her comments were uttered in the context of keeping children away from more "extreme religions," but perhaps this should be considered progress for the liberal filmmaker