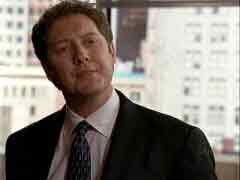 Last night ABC’s Boston Legal was packed full of political jabs. Lawyer Denny Crane (played by William Shatner) was placed on the "No Fly List" and when Alan Shore (played by James Spader) asked if Crane has called for help, his response was, "Well, I can’t get anybody. I called Tom Delay, his number’s disconnected. Foley has got his hands full, Frist said, "Don’t take it personally." I called Clarence Thomas; his office said he was indisposed." Shore then asked, "How you tried going right to the top?" Crane’s response was, "Cheney?"

Soon after, Shore described Crane to a Homeland Security official saying, "Mr. Murch... there is nobody more red, white and blue than this man here. He's for the death penalty. He's pro-life. He doesn't read newspapers. He's exercised every loophole to avoid paying taxes. He's even donated to. The Jack Abramoff ball."

During his closing argument, Shore discussed the cost of changing the technology of Homeland Security. "This can't be undoable. Expensive, maybe, but judging from recent spending patterns, we've got billions to throw around. Halliburton alone has profited over $10 billion from the war. Maybe we could get them to kick in. Why is it our government leaders only tap into the private sector for campaign contributions or to pass out contracts to cronies?"

Finally, to close up the episode Crane asked Shore, "Name a change that relates to this issue-- government technology." Shore, "I made that suggestion in court. Hire the geniuses, not the guy who's got the best lobbyist or the rich friend who will take you to his quail ranch and let you shoot him."