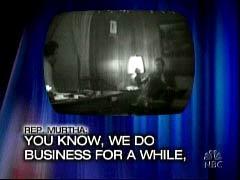 A day after CBS's Katie Couric delivered a softball interview with Democratic Congressman John Murtha, in which she skipped questions about his ethical improprieties, painted him as a victim of attacks after he called for withdrawal from Iraq and cued him up, “Did you feel vindicated last Tuesday?" (NewsBusters item), NBC Nightly News looked at Murtha's possible abuse of his office. NBC's story by Lisa Myers, however, aired only after Democrats favoring Steny Hoyer over Murtha for House Majority Leader, raised Murtha's past. Myers cited how Speaker-to-be Nancy Pelosi promised “the most honest and open Congress in history,” but Myers noted how “some Democrats and ethics experts say that promise was undercut when Pelosi endorsed this man, John Murtha, for the number two leadership position in the House." Referring to liberal speech suppression activist Fred Wertheimer, Myers relayed how “critics claim Murtha has amassed power in part by handing out taxpayer money to special interests, including to clients of defense lobbyists who give him big campaign contributions." In addition, Myers raised ABSCAM as she showed 1980 video of Murtha saying he was “not interested -- at this point” in a $50,000 bribe from an undercover FBI agent.

Before the Myers story, NBC Nightly News had eagerly promoted Murtha's political cause. As documented by NewsBusters at the time, when Murtha urged withdrawal from Iraq, Brian Williams led his November 17, 2005 newscast: 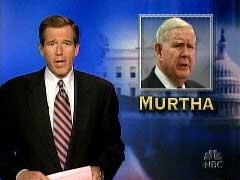 "Good evening. When one Congressman out of 435 members of Congress speaks out against the war in Iraq, it normally wouldn't be news, but it was today because of who he is. Congressman John Murtha, a Vietnam veteran, a Democrat from Pennsylvania, is a 37-year veteran of the U.S. Marine Corps, who voted for both gulf wars. Vice President Cheney once called him one of his strongest allies in Congress back when Cheney ran the Pentagon. Today, John Murtha said the U.S. must get out of Iraq.”

Then, as recounted in a May 17 NewsBusters item:

On the six month anniversary of Democratic Congressman John Murtha's successful publicity stunt call for the U.S. to withdraw from Iraq, the NBC Nightly News jumped on the chance to highlight Murtha's charge that last November some Marines deliberately killed more than a dozen innocent Iraqi civilians. But in treating Murtha as some kind of authoritative figure making “new allegations,” NBC ignored how the charge is old and has already been widely-reported -- including on the March 20 NBC Nightly News.

Brian Williams touted: "There are disturbing new allegations tonight from the Congressman and decorated Marine veteran who stunned the Bush administration about six months ago with his call for U.S. withdrawal from Iraq.” Following a rundown from Jim Miklaszewski of the allegations, Williams trumpeted Murtha's credibility and relevance: “Jim, we should go over again, why is it significant that John Murtha is the one saying this?" Miklaszewski responded with Murtha's argument that the event bolsters his political point as to why the U.S. should leave Iraq, preceded by the misnomer that Murtha had “recently” turned against the war: “It's important because as somebody who recently turned against the war, Murtha held this up today as one of the reasons the U.S. military should get out of Iraq as soon as possible."

Brian Williams: "On the House side of the Capitol building, it hasn't been such smooth sailing for the new Democratic majority. Provided Congresswoman Nancy Pelosi of California has the Speaker of the House job sewn up, the fight is on for the next job, the Majority Leader position. Pelosi is supporting John Murtha, the decorated 37-year Marine veteran from Pennsylvania who wants the U.S. out of Iraq. The other candidate in the race is Maryland Democrat Steny Hoyer, a veteran party whip in the House. Late today, I spoke to Congressman Hoyer, who says he is confident he has the votes to win. Some of that confidence may be a result of questions that others were asking today about a part of John Murtha's record. Our report on that tonight from NBC's Lisa Myers." 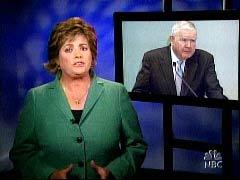 Lisa Myers: "In her first interview after Democrats won control of the House, Nancy Pelosi made a sweeping promise."

Nancy Pelosi, House Minority Leader, in November 8 interview with Brian Williams: "To turn this Congress into the most honest and open Congress in history. That is my pledge. That is what I intend to do."

Myers: "But some Democrats and ethics experts say that promise was undercut when Pelosi endorsed this man, John Murtha, for the number two leadership position in the House."

Fred Wertheimer, ethics reform advocate: "Representative Murtha has basically been on the wrong side of public integrity issues during his career."

Myers: "Critics claim Murtha has amassed power in part by handing out taxpayer money to special interests, including to clients of defense lobbyists who give him big campaign contributions."

Myers: "Then there is this video from an FBI sting in 1980 known as ABSCAM. An undercover FBI agent offers a $50,000 bribe to Congressman Murtha, who is sitting on the right."

Murtha: "At this point."

Murtha: "You know, we do business for a while, maybe I'll be interested and maybe I won't, you know."

Myers: "Murtha refuses the cash and talks about his need to be cautious because of his ambitions. As his supporters point out, that was 26 years ago."

Rep. Martin Meehan (D-MA): "Not only is it ancient history, the fact of the matter is Jack Murtha was never charged with anything."

The online version of the Myers story, as posted on MSNBC.com
NBC Nightly News