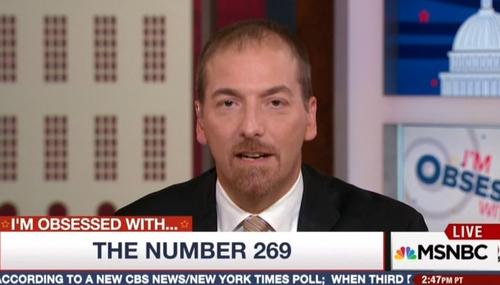 Worried Chuck Todd Wants to ‘Fix' This ‘Flaw in the Constitution’

Scott Whitlock
September 15th, 2016 6:20 PM
MSNBC host Chuck Todd put on his professor hat on Thursday and lectured viewers about the “flaw” in the Constitution that he wants “fixed.” Discussing possibilities where the presidential candidates could get 269 electoral votes and have the election decided in the House of Representatives, Todd fretted, “But are we sure every state with that majority would vote that same way? Are we sure every…

Opinion: Dan Rather, From Buckwheats to Watermelons

Bob Parks
March 9th, 2010 11:12 AM
My boss, Brent Bozell, told me that (in his opinion) Dan Rather is not a racist, but let's not consider his recent faux pas about Barack Obama and his failure to get the health care bill passed as an isolated incident.It was not.On Sunday, March 7th, Dan Rather said the following about the president…"Listen he's a nice person, he's very articulate…"When Rather got to "articulate", I knew we had…

Olbermann Honored By NewsBusters Mats With His Face On Them

Noel Sheppard
February 19th, 2010 1:02 AM
A second MSNBC host on Thursday commented about the NewsBusters doormats featuring the faces of America's most disgraceful cable news network.As NewsBusters reported moments ago, Rachel Maddow did a segment on her show Thursday evening about her visit to our booth at the Conservative Political Action Conference in Washington, D.C.Not to be outdone, her partner in disinformation, Keith Olbermann,…

Noel Sheppard
February 10th, 2010 1:01 AM
On a nightly basis, MSNBC's Keith Olbermann pompously presents himself as being the smartest guy in the room as he belittles every leading Republican in the nation.But on Tuesday, the "Countdown" host exhibited a staggering level of ignorance as he claimed "federal budget debt" -- whatever that is! -- as a percentage of Gross Domestic Product is "about the same as it was in 1970," and "far less…

Essay: So Much More Than Just the New York Times

Seton Motley
February 27th, 2008 9:01 AM
Standard-free journalism on parade all day on NBC's SundayForgotten But Not GoneIt was another do-as-we-say, not-as-we-do day for the National Broadcast Company this past Sabbath. Over the weekend NBC offered up their latest versions of Tim Russert's Meet the Press and the Chris Matthews Show -- the latter being political television's answer to Jerry Springer. In them we were treated to two…

Lynn Davidson
January 1st, 2008 5:56 PM
Johnny Dollar over at Olbermann Watch compiled a list of the orange-tinted “Countdown” host's Top Ten Lies of 2007 (h/t Conservathink). Between doctoring quotes, misrepresenting TV ratings, obsessing over Michelle Malkin's ethnicity and crushing on Bill O'Reilly, the TV host who self-anointed himself as Edward R. Murrow's heir let loose with some tall tales. While lie number one is my favorite (…

Expect Dan Rather Boeing 787 Story to Fly Past Some Facts