NYT's Friedman: Netanyahu's Standing Ovation in Congress 'Bought and Paid for by the Israel Lobby'

New York Times columnist Thomas Friedman, who poses as a tough friend of Israel, offensively referred to the “Israel lobby” in his Wednesday column “Newt, Mitt, Bibi and Vladimir."

After bashing Newt Gingrich for suggesting the Palestinians are an “invented” people, Friedman reiterated the usual talking points in support of a Palestinian state, but with a hostile and paranoid twist.

Bill Maher on his HBO program Friday said, "If you just presented the Republicans with Obama's resume and didn't say who it was, they would erect statues to this guy."

The question of whether or not Social Security is a Ponzi scheme moved from Wednesday's Republican presidential debate to the set of CNBC Thursday.

In a heated debate, CNBC's Rick Santelli and New York Times columnist Tom Friedman argued the issue with them ending up calling each other "idiotic" (video follows with transcript and commentary):

Tom Friedman: The World Would Be a Better Place If Bush Had Raised Taxes on 9/12

America was in a post-stock market bubble bursting recession, had just suffered its worst mainland attack in its history, and New York Times columnist Tom Friedman believes ten years later all would have been made right if the President of the United States on September 12, 2001, had raised taxes.

This is what Friedman, in his most recent blame all the troubles of the world on George W. Bush rant, called "The Whole Truth and Nothing But" Wednesday:

Tom Friedman: All the Interest in Sarah Palin 'A Sign of the Apocalypse'

If it's Sunday, someone must be bashing Sarah Palin on "Meet the Press."

On this holiday weekend, it was New York Times columnist Tom Friedman who said of all the interest in the former Alaska governor, "That’s a sign of the apocalypse" (video follows with transcript and commentary):

MRC has just posted the latest edition of Notable Quotables, our bi-weekly compilation of the latest outrageous, sometimes humorous, quotes in the liberal media. This week, NQ is chock full of quotes from journalists slashing the Tea Party as the Republican Party’s “Hezbollah faction,” who have “strapped explosives to the Capitol” and “waged jihad on the American people.”

The full package is available at www.MRC.org; here are some of the best quotes:

For the past month, as the debt talks slogged on in Washington, the so-called mainstream media unleashed increasingly hysterical attacks on the Tea Party and anti-tax hike conservatives — epitomizing the liberal elite’s supreme annoyance at the push to curb federal spending and contain the size of government.

The media’s disdainful language has ranged from the merely condescending (wondering whether the Tea Partiers in Congress actually knew how things worked, or referring to them as children), to outright hostile (likening the Tea Party to al Qaeda or other terrorist groups). Here are some of the choicer examples MRC has collected over the past 30 days:

As the “conservative," Brooks mostly agreed with the three liberals, calling himself “an admirer of Barack Obama” while offering mild criticism of the president’s “passivity.”

Meanwhile, fellow columnist Thomas Friedman got physically agitated during a sarcastic, self-righteous rant on global warming skeptics like Rush Limbaugh. Friedman also confessed to having voted for Obama (a bit of a no-no under Times' guidelines) and later employed a blunt word to describe Obama’s pro-Israel critics. Here’s his impassioned, physical soliloquy on climate change, about eight minutes into the program:

There are times when one has to think the Manhattan building that is the home of the New York Times doesn't have any windows, doesn't have any television sets, and doesn't have any doors that allow employees to venture out and actually see what's happening in America beyond the walls of 620 Eighth Avenue.

Consider that after the impact the Tea Party has had on our nation's politics the past 20 months, and the historic elections that just took place on November 2, Times columnist Tom Friedman actually thinks Americans aren't interested in reducing the federal deficit but are instead yearning for higher taxes and greater government spending: 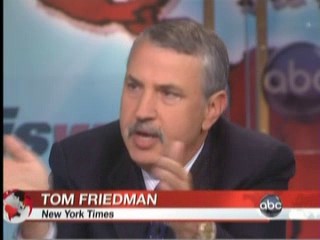 Appearing on the Roundtable segment of ABC's "This Week," Friedman blasted the President saying, "I'm for more health care. I'm glad we've extended it to more Americans. But the fact is there's a real, I think, argument for the case that Obama completely over-read his mandate when he came in."

Friedman continued, "He was elected to get rid of one man's job, George Bush, and get the rest of us jobs. I think that was the core thing, and by starting with health care and not making his first year the year of innovation, expanding the economy and expanding jobs, you know, I think looking back, that was a political mistake." 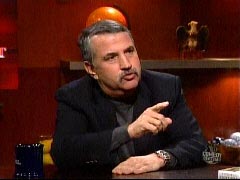 Tom Friedman stepped into a journalistic controversy in his Sunday New York Times column, "Can We Talk?" protesting CNN's firing of senior editor of Middle East affairs Octavia Nasr for posting this message on Twitter upon the death of Hezbollah founder Mohammed Hussein Fadlallah:

Sad to hear of the passing of Sayyed Mohammed Hussein Fadlallah... One of Hezbollah's giants I respect a lot.

According to Western intelligence, Fadlallah blessed the drivers of the vehicles behind the 1983 attacks on Marine barracks in Beirut which killed 241 Marines. President Clinton froze his assets in 1995 because of his suspected involvement with terrorists.

Yet Friedman was dismayed by Nasr's dismissal by CNN:

I find Nasr's firing troubling. Yes, she made a mistake. Reporters covering a beat should not be issuing condolences for any of the actors they cover. It undermines their credibility. But we also gain a great deal by having an Arabic-speaking, Lebanese-Christian female journalist covering the Middle East for CNN, and if her only sin in 20 years is a 140-character message about a complex figure like Fadlallah, she deserved some slack. She should have been suspended for a month, but not fired. It's wrong on several counts.