Taking journalistic hypocrisy to ever-headier heights, Politico's Todd Purdum spent hundreds of words Wednesday evening bemoaning the potential impact of an incident which both sides involved say never happened, and acted as if incivility only comes out of the mouths of conservatives and Republicans.

Earlier Wednesday, the website's Tal Kopan relayed news that Illinois Democratic Senator Dick Durbin "said in a Facebook post that a House Republican leader told off President Barack Obama during a negotiation meeting, and that GOP leaders are so disrespectful it’s practically impossible to have a conversation with them." The supposed statement to Obama by a GOP leader, which both White House spokesman Jay Carney and House Speaker John Boehner say never was made, and which Durbin could not have observed or heard because he wasn't there, was: "I cannot even stand to look at you." Durbin, it must be recalled, ultimately was forced to apologize for comparing U.S. troops at Guantanamo Bay to "Nazis, Soviets in their gulags or some mad regime — Pol Pot or others — that had no concern for human beings," in 2005.

The December 31 edition of PBS's Washington Week tried to spin the year 2010 in the most favorable way for Obama. First, Washington Post reporter Karen Tumulty tried to suggest the massive Democratic losses in the House were somehow pretty conventional, yawn:

Well, I think it shook out as a pretty conventional midterm election. All year long, right up until Election Day, the Democrats kept telling us elections are really choices between two candidates and the Republicans kept saying no, this is going to be a referendum on the president. And that’s what midterms are for after presidential elections.They are often the American public kind of putting its foot on the brake just a bit.

A 63-seat loss for the Democrats? That's not so high a tidal wave. Then host Gwen Ifill suggested the electorate missed something. It was a better year for America and Obama than the voters thought: 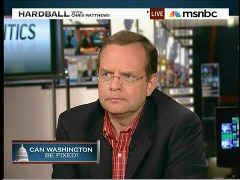 Todd Purdum, a former White House reporter for the New York Times in the Clinton years -- a man so impressed by Clinton's first press secretary Dee Dee Myers that he married her -- discussed his latest Vanity Fair article on how Washington is broken on the NPR show Fresh Air on Tuesday. Purdum's most noteworthy complaint is how the Washington press corps is mean-spirited, even "profoundly silly" in its "perverse rituals" of questioning President Barack Obama. (See Lachlan's blog, too). Dave Davies, the substitute host for Terry Gross, helpfully summed up the thesis:

DAVIES: In the afternoon, you say there's this what you call one of the most perverse rituals of the modern presidency. That's the press briefing. Why is it perverse?

PURDUM: Well, if what the congressional leaders do is Kabuki theater, what the press do is really it's really comic theater. It's opera bouffe (comic opera), I guess. But, you know, I used to cover the White House 15 years ago for the New York Times, and I went to the briefing every day, and I confess that I thought it was kind of silly then. 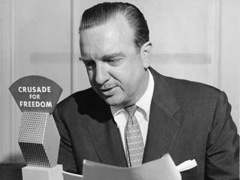 Vanity Fair's national editor Todd Purdum has a long piece in the most recent issue (in the print edition only, as far as I can tell) bemoaning what he argues are the new and unique challenges facing the Obama administration, including the state of the news media. Purdum's opinions on the state of the news business boil down to a call for the press's continuing political uniformity.

He offers a quote from White House adviser Valerie Jarrett that also captures the author's opinions on the issue. Purdum writes:

Obama's senior adviser Valerie Jarrett looks back wistfully to a time when credible people could put a stamp of reliability on information and opinion: "Walter Cronkite would get on and say the truth, and people believed the media," she says. Today, no single media figure or outlet has that power to end debate, and in pursuit of "objectivity," most honest news outlets draw the line at saying flatly that something or other is untrue, even when it plainly is.

Purdum's and Jarrett's statements are comprised of one part revisionist nostalgia, and one part liberal elitism. "Objectivity" was never really present. What they're longing for is the reliable white-collar liberalism of the 20th century news media.

Hardball Panelist Whines: Townhallers Only Getting News From Limbaugh, Drudge and Fox News

NBC's Chuck Todd, substitute hosting for Chris Matthews on Monday's Hardball, invited on Vanity Fair's Todd Purdum and the Politico's Jonathan Martin to navel gaze about what ailed the political structure as Todd questioned "Is Washington broke and beyond repair?" Pivoting off a Purdum article, that in part, blamed lobbyists, Martin offered his own explanation as he brought up the typical mainstream media boogeymen of the Drudge Report, Rush Limbaugh and Fox News.

After Todd noted that it's not just the "lobbying community" causing distress in D.C., that the "media is playing a role here" and "it's not clear which came first, the polarized Washington or the polarized way that people get information," Martin buttressed Todd's point by offering his personal account of a Florida townhall meeting where he claimed voters there were only "listening to Rush Limbaugh," "reading Drudge" and "watching Fox News." 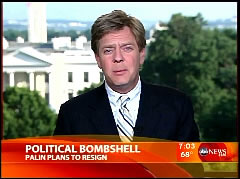 Good Morning America's David Wright on Saturday continued his habit of dropping insulting comments into stories about Sarah Palin, snidely asserting that the Alaska governor "lacked seasoning and, some would say, a firm grasp of the issues." Wright, who was reporting on Palin's announcement that she would be resigning her office, also speculated that far more serious motives could be behind the move.

He darkly intoned, "It is difficult to ignore the timing of this announcement, late on a Friday afternoon, on a holiday weekend. Many Americans bound to be tuned out. That suggests that the reasons are not good ones." And although the ABC journalist also commented that many in the Republican Party saw Palin as a "fresh face" in the GOP, Wright has a long history of adding demeaning comments to his stories on the 2008 vice presidential nominee.

More seriously, she regurgitated an extremely dubious anecdote from the recent Vanity Fair hit piece on Sarah Palin by former Times journalist Todd Purdum. It's a good example of how liberal media elites pass along their own prejudices by their willingness to believe even the most far-out stories that reflect badly on their political enemies.

Sarah Palin showed on Friday that in one respect at least, she is qualified to be president.

Caribou Barbie is one nutty puppy.

"If Sarah Palin Weren't a Fanatic, I Might Feel Sorry For Her" blares the headline for Bonnie Erbe's June 30 blog post up at USNews.com. Gov. Palin joins blogger Michelle Malkin as a target of Erbe's rather catty disdain.

The PBS "To the Contrary" host and US News contributing editor alerted her readers of her antipathy for the former Republican vice presidential nominee in light of Todd Purdum's drive-by hit piece in Vanity Fair [see NB contributor Mike Sargent's excellent takedown of that here]:

Gov. Palin is a woman on a right-wing mission. She's clearly not ready for prime time. She's easy grist for any journalistic mill. If she weren't such a fanatic, I could feel sorry for her. But since she enjoys killing moose, wolves, and anything else in her rifle sight, I'll pass, thanks.

Erbe generally has been harsh on Palin, but once lauded the Alaska governor for admitting that for a very brief moment she considered aborting her youngest child Trig: 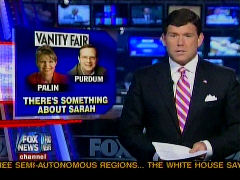 In the “Grapevine” segment, Baier recounted how Purdum was appalled by “a public official who often seems proud of what she does not know is not only accepted but applauded,” quoted “an anonymous friend of presidential nominee John McCain as referring to Palin as quote, 'little shop of horrors,'” and charged “that on the campaign trail aides quote, 'worried about her mental state: Was it possible that she was experiencing postpartum depression?'” Plus, “quote: 'No political principle or personal relationship is more sacred than her own ambition.'”

In “Liberal Media and GOP Hacks vs. Palin” on the Weekly Standard's blog, Bill Kristol denounced the “hit piece” from the “lefty” Purdum:

You don't have to be a big Palin fan to recognize the article is full of dubious claims, and is dependent on self-serving stories provided on background by some of the people who ran the McCain campaign into the ground.

On December 15, NBC’s Today invited Time editor Richard Stengel to promote who might become their Person of the Year, which allowed Stengel to boast: "Obviously, Barack Obama is a titanic figure on the world and American stage now. I mean, he may already be a transformational figure in American politics." (Stengel returned two days later to publicize Obama’s selection.)

Bill Clinton’s attack on former New York Times reporter Todd Purdum for his anonymously-sourced attack piece in the usually liberal-pleasing Vanity Fair magazine was greeted as strange by the liberal media elite. They might have thought Purdum was being attacked like he was writing Clinton-bashing stories for The American Spectator. So maybe it’s not surprising that American Spectator editor-in-chief R. Emmett Tyrrell is charging that Purdum is plagiarizing material out of his latest book The Clinton Crackup: The Boy President’s Life After the White House. From his press release:

CNN senior political analyst (and former Clinton adviser) David Gergen, responding to Todd Purdum’s recent Vanity Fair article on Bill Clinton during a segment on Monday’s "Anderson Cooper 360," acknowledged that the former President "does have a temper, and he goes off like Mount Vesuvius," but then went on to criticize Purdum’s article, that it "does not give enough weight to what he has done in the non-profit sector," specifically referring to the Clinton Global Initiative.

Clinton had called Purdum a "scumbag," "sleazy," and a "really dishonest reporter." He also accused the Vanity Fair editor of trying to "nail Hillary for Obama. It's the most biased press coverage in history."