Networks Yawn at Claim of 'Significant Decline' in Press Freedom in U.S. Under Obama

ABC, CBS, and NBC's morning and evening newscasts have so far punted on reporting the strong critique of the Obama administration's "disturbing retreat from democratic practices" with regard to the freedom of the press, according to Reporters Without Borders. The U.S. fell 13 places in the international group's annual "World Press Freedom Index" for the federal government's "increased efforts to track down whistleblowers and the sources of leaks."

The organization spotlighted the controversial leaks from Bradley Manning and Edward Snowden as examples, but also included the Department of Justice's seizure of the Associated Press' phone records as a "reminder of the urgent need for a 'shield law' to protect the confidentiality of journalists' sources at the federal level." Fox News' Shannon Bream devoted a brief to the Reporters Without Borders report on Wednesday's Special Report: [MP3 audio available here; video below the jump]

George Will: ‘ObamaCare a Tapestry of Coercions Mitigated by Random Acts of Presidential Mercy’

It really is wonderful having George Will on Fox News where we can see him more regularly than for a few minutes once a week.

On Monday’s Special Report, Will said of the revelation earlier in the day that people now had until Tuesday to sign up at Healthcare.gov, “ObamaCare now is a tapestry of coercions mitigated by random acts of presidential mercy announced in the most bizarre ways” (video follows with transcript and absolutely no need for commentary):

Author Reza Aslan was disingenuous about his biases in his weekend interview with Fox News Channel's Lauren Green, NewsBusters publisher and Media Research Center founder Brent Bozell told FNC's Shannon Bream on the July 31 edition of America Live. Aslan, as a Muslim, denies the divinity of Christ, and should have been straightforward about how his religious beliefs would necessarily color his view of Jesus, which he protests is purely a scholarly inquiry.

Besides proudly insisting he has no biases, Aslan got a number of basic things about Christ wrong, Bozell said, including the absurd claim that Jesus is never quoted in any biblical account as claiming divinity. Additionally, the MRC president noted, Aslan "also said, more than once, that he had a history degree in religion" when "in fact, he doesn't." [to watch the full segment, view the embedded video below the page break]

During a weekend dominated by partisan bickering over the verdict in the George Zimmerman trial, it was refreshing to see a network that wasn’t exclusively covering the reaction to the verdict. On the Fox News Channel program America’s News Headquarters, host Shannon Bream served as the moderator of a “fair and balanced debate” on the recent revelations that a Tucson school district received funding for an Arabic language program from an organization with ties to the Muslim Brotherhood.

The Tucson Unified School District has reportedly accepted a $465,000 grant from Qatar Foundation International, a philanthropic organization that has close ties to the Muslim Brotherhood, which is, of course, closely tied to many Islamic extremist groups including Hamas and Al Qaeda.

On the "Grapevine" section of Friday night's Special Report, Fox News anchor Bret Baier reported the MRC's findings on how the networks covered this year's "March for Life" -- or, to be more precise,  how they skipped it. Once again, ABC, CBS, and NBC aired nothing on the thousands and thousands of pro-life protesters marching to the Supreme Court on the 39th anniversary of the high court legalizing abortion.

"If you were listening to the Big Three broadcast networks, you wouldn’t have heard a peep about the event," said Baier. "You would have been in the dark, too, if you were reading the print version of The New York Times. Not one word." Fox asked me for a quote which then appeared on screen: (Video below)

Rezko Sentenced to 10½ Years, Media Ignore It And/Or His Ties to Obama

Depending on which news outlet you rely on for current events, you may not have heard that convicted Chicago real estate developer Tony Rezko was sentenced to 10½ years in prison Tuesday.

On top of this, unless you read the following report from Reuters, you mightn't have known just how connected he was to a junior senator from Illinois who just so happens to be the President of the United States:

Someone at Fox News has some serious 'splaining to do.

During a Sunday segment about former Alaska governor Sarah Palin's interview with Chris Wallace earlier in the day, a picture of Tina Fey impersonating her nemesis was accidentally placed in the upper-right corner of the screen: 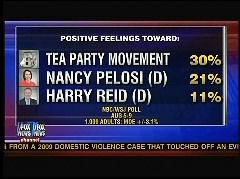 A new poll suggests Americans have more positive feelings for the Tea Party movement than for either of the Democratic leaders in Congress. The NBC/Wall Street Journal survey finds 30 percent have a favorable view of the Tea Party movement, compared to House Speaker Nancy Pelosi's 21 percent and Senate Majority Leader Harry Reid's 11 percent.

The evening before, on Wednesday’s NBC Nightly News, Todd declared: “It’s an unhappy America” where “the Democrats hit a record high in their negative rating – 44 percent” while “the Republicans are doing even worse – 46 percent of the country has a negative view of the Republican Party” and “even the Tea Party – which has actually enjoyed a little bit of a renaissance over the last six months – 34 percent now have a negative view. Just 30 percent have a positive view.”

President Obama’s recess appointment of Dr. Donald Berwick – a controversial advocate of socialized medicine and of government rationing of health care, particularly for the elderly – as head of the Medicare and Medicaid programs has so far received no attention on ABC’s World News or on the CBS Evening News, while the NBC Nightly News on Thursday devoted just 38 seconds to the President’s controversial move that circumvents a possibly bruising Senate confirmation hearing, barely touching on the nature of Berwick’s beliefs and their possible implications for the elderly. Broadcast network morning newscasts have similarly shown little to no interest in the subject. CNN’s The Situation Room devoted a full story to the appointment on Wednesday, but did little better than NBC in informing viewers of the significance of Berwick’s beliefs.

By contrast, FNC’s Special Report with Bret Baier on Wednesday relayed to viewers that Berwick has not only advocated the type of socialized medicine that currently limits access to health care in Britain – favoring a non-free market system based on wealth redistribution – but he has also spoken in favor of government limiting access to some health care procedures for the elderly in favor of younger patients.

FNC correspondent Jim Angle filled in viewers on how the elderly would be treated under a system Berwick might advocate:

Words, just words. But which ones excite journalists and which ones don't? A test case Wednesday night as ABC and NBC, matching the focus of CNN and MSNBC throughout the day, aired segments on controversy over Virginia Governor Bob McDonnell leaving condemnation of slavery out of a proclamation issued last week calling April “Confederate History Month,” but neither had any time for an AP report about how the Obama administration plans to eliminate from the National Security Strategy terms such as “militant Islamic radicalism.”

FNC's Special Report with Bret Baier managed to cover outrage generated against both actions. Shannon Bream reported the administration may be:

[C]hanging language in the National Security Strategy, a document which was last modified under President George W. Bush in March 2006 and reads, quote: “The struggle against militant Islamic radicalism is the great ideological conflict of the early years of the 21st century.” The Obama White House will not comment on reports that a new version of the NSS could drop language like “Islamic radicalism.” But critics of the possible modification call the idea political correctness run amok...

Diane Sawyer teased at the top of the April 7 World News: “Virginia's Governor wants to celebrate Confederate history and not mention slavery?”

"There is a huge effort underway right now by government-run media and by the Left to use any tactic that they can whatsoever to invalidate the message of the Tea Party movement."

Appearing on FNC's "America's News HQ" with host Shannon Bream, Loesch claimed the media don't like "the message of individual liberty and limited government that this Tea Party movement is bringing, and since they can't kill the message, they're trying to kill the messenger" (video embedded below the fold with partial transcript, h/t HotAirPundit):