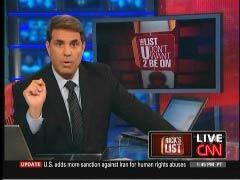 CNN's Rick Sanchez positioned himself above the fray between "right wing" Fox News and "liberal" MSNBC on Thursday's Rick's List. Sanchez named Keith Olbermann, Rachel Maddow, and their network to his "List U Don't Want 2 Be On," after the Obama administration supposedly exposed his competitor's left wing bias, and claimed that he "wasn't necessarily liked" by the current or previous administrations.

Before putting his colleagues at MSNBC on his "list," the CNN anchor invoked his longtime vendetta against his other competitor and took a swipe at the last vice president: "Much was made of Vice President Cheney's insistence- remember this?- on only watching Fox News in his travels. It's a true story. Whenever he checked into hotels, he would have his staffers tune all of the TVs in the hotel to only Fox News, so he could just hear about his policies, repeated back to him by a right-wing television network."

Sanchez then moved on to his main subject: "Well, today I asked this question: what about MSNBC and their relationship now with this White House? Here's 'The List U Don't Want 2 Be On.'" He continued with the claim that "if you don't think for one minute that MSNBC is to Barack Obama what Fox was to Bush and Cheney, then you obviously haven't heard this comment that I'm about to share with you- this comment from Deputy White House [Press] Secretary Bill Burton."

By Matthew Balan | September 30, 2010 5:07 PM EDT
On Wednesday's Rick's List, CNN's Rick Sanchez implied that Fox News played some kind of part in James O'Keefe's attempted "punk" of correspondent Abbie Boudreau: "The same right-wing videographer, who entrapped and embarrassed innocent people in the past, tries it again- this time on a CNN correspondent....How could he try something so stupid, and what was Fox News's role?" [audio clip available here]

Sanchez made this parting shot at his longstanding nemesis on the last prime time edition of his show, as the 8 pm time slot on CNN is being taken over on October 4 by a new program featuring former New York governor and "Client Number Nine" Eliot Spitzer and pseudo-conservative Kathleen Parker. The anchor raised his implying question about the apparent "role" of Fox News during the lead-in to his program. Instead of making a direct accusation against Fox News, as he did in the aftermath of the murders of three Pittsburgh, Pennsylvania police officers in April 2009, he replayed an earlier interview with Boudreau from the top of the 4 pm Eastern hour of his program.

Stephen Colbert Slams Rick Sanchez: His Endorsement Could Get Me Tens of Supporters 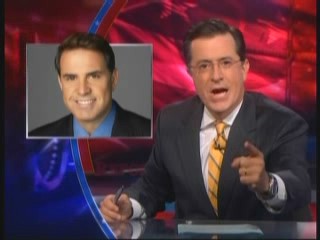 Comedian Stephen Colbert on Thursday ridiculed Rick Sanchez, the much-maligned CNN personality that deservedly is the butt of many jokes.

After telling his "Colbert Report" viewers that Jon Stewart's Washington rally next month has been endorsed by Oprah Winfrey, Colbert informed them that he too has gotten a "major media figure" in his corner.

Upon learning the endorsement is from Sanchez, Colbert said, "Wow. Rick Sanchez. The coveted Sanchez bump. That could get me tens of supporters."

After showing a clip of the CNNer making a fool of himself on the air, Colbert panicked, "Oh, my God. It's like I'm a freshman and I've just been befriended by a loser upper-classman" (video follows with transcript and commentary, h/t Right Scoop):

By Matthew Balan | September 21, 2010 7:03 PM EDT
On Tuesday's Rick's List, CNN's Rick Sanchez again bashed Fox News and the conservative media, two of his favorite subjects of ire. Sanchez stated that President Obama was being "dogged" and blamed "conservative talk radio hosts...lambasting this man 24/7.... [and] Fox News, which is essentially the voice of the Republican Party, whose job it is to make this man look bad no matter what he does" [audio clip available here].

The CNN anchor brought on political correspondent Jessica Yellin at the bottom of the 3 pm Eastern hour to discuss the President's town hall meeting on Monday. After playing a clip of Velma Hart, an Obama supporter who bluntly told the chief executive that she was "exhausted of defending" him, Sanchez asked Yellin for her take on whether "others out there are thinking in many of the ways that she [Hart] expressed herself." 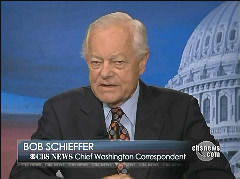 Just posted this morning over at MRC.org, our latest edition of Notable Quotables, a bi-weekly compilation of the latest outrageous, sometimes humorous, quotes in the liberal media. Topics this week include: CBS's Bob Schieffer absurdly suggesting Republicans could face a landslide defeat this year, "very much like 1964," while Katie Couric frets (again) how "moderate Republicans are becoming an endangered species." Also in this issue, NBC's Meredith Vieira declares that the Bush tax cuts "didn't succeed, so what's so good about them," while CBS's Harry Smith lobbies for "a second stimulus" or even "something like a new WPA."

Oh, and Chris Matthews gets another “thrill” from hearing Obama speak — this time, it’s “all over me.” Video of that confession, plus three other clips after the jump.

Now the quotes from recent weeks, as featured in the September 20 Notable Quotables:

Steve Krakauer at Mediaite reported CNN anchor Rick Sanchez has been on the air promoting his new book (badly titled Conventional Idiocy) – 36 times in the last three weeks. "So how did the book sell? According to numbers Mediaite obtained from Bookscan, Sanchez’ book sold 802 copies in its first week."

As of Saturday, it ranked #5,920 on Amazon and #13,287 on Barnes & Noble. Perhaps Sanchez and his publishers at Penguin didn't realize that the title doesn't sound like a critique of someone else. It sounds like "Come buy 272 pages of idiocy." That might work for a comedian, but not for an anchorman. The shot at left is actually meant as a publicity shot to promote the book, not Sanchez's lack of savvy around electric cords.

The Smoking Gun relayed that photo and their take on Sanchez's titanic ego:

While the mainstream media have been in a frenzy to denounce Christine O'Donnell as a kook for her socially conservative statements on abstinence from the 1990s, the cable news networks had a perfect opportunity this afternoon to let her speak for herself.

Collectively they gave her less than five minutes.

The Republican Delaware Senate nominee gave a speech at the Values Voters Summit in Washington, D.C. this afternoon from about 3:25 to 3:45 p.m. EDT. Of the three major cable news networks, Fox News showed none of the speech while MSNBC's Chris Jansing gave viewers just under a minute of O'Donnell audio before interviewing Time magazine's Jay Newton-Small about concerns some GOP operatives have about O'Donnell being a weaker matchup against the Democratic nominee than Rep. Mike Castle (R) would have been.

Only CNN's Rick Sanchez gave O'Donnell a substantial chunk of time: 3 minutes and 33 seconds. When Sanchez cut away from O'Donnell, he noted that she's "getting her first taste of the national spotlight" since clinching the nomination and promised that CNN would "continue to follow as the midterms in November draws near."

CNN's Rick Sanchez thinks that Ronald Reagan wouldn't even be conservative enough for certain members of the Tea Party.

Sanchez discussed Tuesday's Republican Senate Primary in Delaware on his Monday news hour. He criticized the Tea Party's opposition to GOP establishment candidate Congressman Mike Castle as over-the-top, and claimed Castle is "respectable" and "conservative enough" for the region. Castle has a lifetime ACU rating of 52.

Tea Party members in Delaware have largely supported the more conservative Christine O'Donnell. Sanchez believes O'Donnell gives the GOP less of a chance to win in the general election.

"But you know what's interesting about this," Sanchez continued, "I mean if you put this in perspective, Ronald Reagan would be taken out of the mix by some of these more far-Right Tea Party folks. Richard Nixon would never have become the President of the United States."

Rick Sanchez to Pataki: Did Your Opposition to Mosque Lead to Koran Burning?

By Matthew Balan | September 9, 2010 4:47 PM EDT
On Wednesday's Rick's List, CNN's Rick Sanchez tried to connect the overwhelming opposition to the planned Ground Zero mosque to a Florida pastor's "Burn a Koran Day" event. Sanchez asked former New York Governor George Pataki, "Do you feel in any way that some of this backlash...led by some fine gentlemen like yourself...has kind of paved the way for that controversy, and if so, do you feel guilty at all?" [audio clip available here]

Sanchez interviewed Pataki during the prime time edition of his program. Just before the bottom of the 8 pm Eastern hour, the anchor raised Pastor Terry Jones's planned inflammatory protest: "Let me ask you one final question, if I possibly can. There's this new hullabaloo going on in Gainesville, Florida, with this pastor who wants to literally burn Korans. And now, we're getting protests in Afghanistan- our generals are saying this guy's going to get our troops killed."

CNN's Rick Sanchez took a very strong position about a White House promise on Monday only to have to backtrack and admit he was wrong 45 minutes later.

The CNN host arrogantly continued, "I don't think you're right. Prove me wrong."

By Matthew Balan | September 2, 2010 1:13 PM EDT
CNN's Rick Sanchez, who was quick to blame Fox News for the 2009 murders of three police officers in Pennsylvania, treaded much more carefully on Wednesday's Rick's List as he covered the eco-terrorist who brought bombs, guns, and took hostages at Discovery Channel's headquarters. Sanchez stated that Lee may have been "well-meaning," but "most watching this would argue he may have taken [his cause] way too far on this day" [audio clip available here]. Most?

The breaking news about James Lee's standoff at the educational channel's Silver Spring, Maryland office building dominated Sanchez's broadcast. Twenty-five minutes into the 3 pm Eastern hour, during an interview of former hostage negotiator Tom Fuentes, the anchor summarized Lee's manifesto: "He apparently wants the Discovery Channel...[to] broadcast certain commitments to save the planet...He's apparently anti-war....He's concerned about global warming, talks about Malthusian sciences, continues to come back to saving the planet." He then asked Fuentes, "So...if you get my drift, Tom, he's very concerned. He's an activist, may be very well-meaning, but he's now put himself in a situation where he, the police officers and his hostages' lives are endangered. What do you do?"

By Matthew Balan | August 30, 2010 5:44 PM EDT
CNN's Rick Sanchez quickly apologized on his Rick's List program on Monday after inadvertently labeling Barack Obama the "cotton-picking president of the United States." Sanchez used the racially-tinged term in response to the President recently addressing the significant percentage of American population who believe he is Muslim or was born outside the U.S. [audio available here]

The anchor raised President Obama's recent comment about his birth certificate with correspondent Jessica Yellin 21 minutes into the 3 pm Eastern hour. Yellin explained that "this is the first time he's talked about it since the polls showing how many Americans believe him to be Muslim came out" and that "you get the sense that he's been sort of through this. He wants to set the record straight, but he really does seem to accept that he's not going to convince everyone, and he's not going to spend a lot of time and energy on something that's not going to change."

Sanchez replied to Yellin full of frustration: "I'm just sitting here just shaking my head. He is the cotton-picking president of the United States!" He continued with another slighter gaffe: "If the president of the United States doesn't have enough of a bully pulpit to convince people of a lie- that a lie is a lie, I should say, then- you know, where are we? What kind of planet are we living on? What the hell is going on here?"